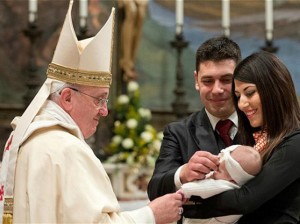 Pope Francis gave a special blessing on Sunday to children around the world who have recently been baptised and adults and young people preparing or who have recently received the Sacraments of Christian Initiation.

The blessing followed his baptism of 26 baby girls and boys during Mass in the Sistine Chapel marking the feast day of Jesus’ baptism in the River Jordan.

In his short homily, the Pope said that through baptism, our faith is handed on from one generation to the next, throughout the course of history.

To the parents of the 13 girls and 13 boys, he said they must never forget that faith is the greatest heritage they can give to their children.

In his Angelus address, following the Mass, the Pope recalled the Gospel accounts of the Baptism of Jesus, during which the Holy Spirit is seen descending like a dove and a voice is heard from heaven saying “You are my beloved Son, in whom I am well pleased”.

In this way, the Pope said, Jesus is revealed by God as our saving Messiah.

Through this event, which is found in all four Gospel accounts, he said, the Holy Spirit frees us from the darkness of original sin and restores to the baptized person the beauty of divine grace.

This extraordinary dignity of Baptism, through which we are called to be children of God, the Pope said, also brings with it the responsibility of following Jesus and imitating his obedience, humility and tenderness.

His comments were made as the first details began to emerge of a new interview book with the Pope which will be released on Wednesday.

‘The Name of God is Mercy’ is a conversation between the Pontiff and Italian Vatican writer Andrea Tornielli about the Year of Mercy. It is published simultaneously in 80 countries.

The Vatican is set to mark the launch of the book on Tuesday with a panel discussion featuring Vatican Secretary of State Cardinal Pietro Parolin and actor Roberto Benigni.

The book offers a treatise on Francis’ understanding of mercy. In it the Pope states that “The Church does not exist to condemn people, but to bring about an encounter with the visceral love of God’s mercy.”

Quoting the 4th-century St Ambrose, the Pope states, “When it comes to bestowing grace, Christ is present” and he steers away from an over-reliance on rules insisting that “mercy is the first attribute of God.”

Discussing the issue of communion for the divorced and remarried, Pope Francis reveals how one of his nieces married a man who had been married before and therefore was barred from communion.

He also comments on the issue of homosexuality, urging Christians to “overcome prejudice and rigidity” and insisting that gay people should be welcomed into the life of the Church and that people should not be “defined” by their sexuality.