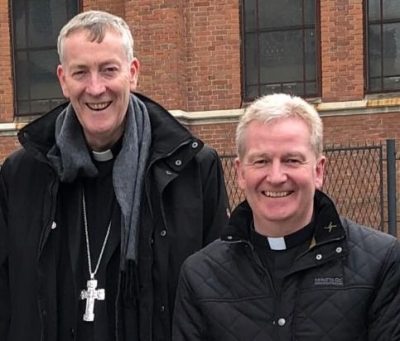 The parish priest of Newbridge in Kildare & Leighlin, Fr Paul Dempsey, has been appointed by Pope Francis as the new Bishop of Achonry.

The episcopal appointment was announced simultaneously in the Vatican and Ireland following 11am Mass in the Cathedral of the Annunciation and Saint Nathy in Ballaghderreen, Co Roscommon.

The Mass was concelebrated by Archbishop Jude Thaddeus Okolo, the Apostolic Nuncio to Ireland, Bishop-elect Paul Dempsey and Fr Dermot Meehan, Diocesan Administrator of the Diocese of Achonry.

The new bishop has a strong focus on youth ministry, vocations as well as communications. Newbridge parish has been described by Archbishop Eamon Martin as “one of the largest and most vibrant parishes in the country”.

Responding to the news, Bishop-elect Dempsey said that in his twenty-two years of service in the Diocese of Kildare & Leighlin he had worked a lot with young people.

“I have often heard it said that young people are the future of the Church, but we must remember you are not just the future, you are the Church of today! Each one of you is created by God in a unique and special way. He has a special mission in mind for each one of you. You are His disciples!” he said on Monday.

“Remember, the world needs Christ, Christ needs you! He needs your energy, your enthusiasm, your generosity. As you share these gifts in the life of the Church, you open up all sorts of new possibilities now and into the future. So, let’s work together to build that future of hope!”

The 48-year-old also paid tribute to his brother priests, parishioners, deacons, friends and religious who had helped him to grow as a person and as a priest, “enabling me to say today that I love being a priest, despite the many challenges that have been part of the journey for any of us who have travelled this road”.

“As I take a new direction, there is a sadness within me as I leave the Diocese of Kildare & Leighlin but I know the love and support I have received there, I bring with me to this new chapter of my life in the Diocese of Achonry.”

The beginning of that new chapter started with a phone call from Archbishop Okolo on the morning of 16 December. “I’m still not over the shock!” he admitted.

Bishop-elect Dempsey also paid tribute to Bishop Denis Nulty, whom he described as “a man who is held in the highest esteem in the Diocese of Kildare & Leighlin by priests, deacons, people and religious.”

“Bishop Denis has been unflinching in his care and support of me since he became bishop over six years ago and especially these past few weeks. He has been a true brother and friend, for which I say, thank you.”

The incoming bishop of Achonry has already got a strong connection with the diocese as his brother, Tony lives in Kiltemagh with his wife and family, and it is a place he has visited many times.

Most of his life as a priest has been in parish ministry as well as in youth and vocations work and some local media involvement.

“I hope the experience gained in these areas will help me in my ministry in the Diocese of Achonry. The diocese here is steeped in faith going back to the sixth century with its patrons’ St Nathy and St Attracta. Over the centuries that faith has adapted to changing times and now that faith is in our hands.”

“We need to reflect deeply on how we nourish and hand on that faith today in the midst of many challenging questions. I look forward to us working together as we face those questions and respond to the call of Christ outlined in the Gospel of Luke; ‘Duc in Altum’ (Luke 5;4) ‘Put out into the deep.’ That call of Christ to ‘go out’ is as real here today in the Diocese of Achonry as it was when Christ first called from the shore.”

Responding to the announcement, Archbishop Michael Neary of Tuam said it was also great news for the faithful of Achonry who have been looking forward to a new bishop since Bishop Brendan Kelly was transferred to Galway two years ago.

Describing the Bishop-elect as a “gifted communicator”, Archbishop Neary said, “Fr Dempsey has garnered a wealth of pastoral experience since his ordination in 1997 through his priestly ministry in Clane, Kildare and most recently as Parish Priest of Newbridge. He has also served as Diocesan Youth Director and Director of Vocations.”

He added that Fr Dempsey has hosted a very successful religious affairs programme on KFM Radio, and has also written a regular column in the Leinster Leader newspaper, as well as other media appearances.

In response to this morning’s announcement by Pope Francis, Archbishop Eamon Martin has congratulated Fr Dempsey, noting that his service to the Church, particularly in the areas of youth ministry, communications and on matters concerning faith and culture, is well known and will provide a great foundation for his pastoral leadership as a diocesan bishop.

“Since 2015, Bishop-elect Dempsey has been parish priest of Newbridge – one of the largest and most vibrant parishes in the country. He is known as a hard-working and caring pastor who will no doubt be missed greatly by the people, clergy and religious of his native diocese. The pastoral experience and wisdom he has gained in Kildare & Leighlin will be of huge benefit to him as he takes up the role of shepherd of God’s people in Achonry.”

Archbishop Eamon also expressed his gratitude to Fr Dermot Meehan who had been serving as the Diocesan Administrator of Achonry, whom he said had offered valuable insights at the plenary meetings of the Bishops’ Conference in Maynooth.

Fr Paul Dempsey was born in Carlow Town on 20 April, 1971.  He is the youngest in his family, and has one brother and two sisters.

In 1978 his family moved to Athy, Co Kildare where he was educated by the Christian Brothers at primary and secondary level.

He joined the seminary in 1989. His studies took place in the Milltown Institute, Dublin, St Patrick’s College, Carlow and All Hallows College, Dublin.

During his formation for the priesthood his mother, Berry, died from cancer in February 1994 and his father, Tony, died suddenly twelve days later.

He was ordained to the priesthood in the Cathedral of the Assumption, Carlow, by Bishop Laurence Ryan, on 6 July 1997.

Fr Paul’s first appointment was as curate in Clane & Rathcoffey Parish, Co Kildare. It was during this time that he started a weekly article in the Leinster Leader newspaper.

After seven years he moved to Kildare Town as curate and was also appointed Youth Director and Vocations Director for the diocese by Bishop Jim Moriarty.

During this time, Fr Paul organised two diocesan World Youth Day pilgrimages to Cologne (2005) and Sydney (2008) as well as many other youth initiatives. He also presented a weekly religious and social affairs programme on Kildare FM Radio on Sunday mornings.

In 2008, Fr Paul did further studies in the Milltown Institute, Dublin and completed a Master’s Degree in Theology in the area of Faith & Culture. His thesis was entitled ‘The Contemporary Irish Catholic Church – A Church in Crisis or in Question?’

On completion of his studies, Fr Paul took up his appointment as curate in parish cluster of Naas, Sallins and Two-Mile-House in 2009.

In August, 2014, Bishop Denis Nulty appointed him to Newbridge Parish and also as Vicar Forane for the Kildare & Leighlin North Deanery consisting of 17 parishes.

On 1 September 2015, he was appointed parish priest of Newbridge and Administrator of Caragh and Prosperous Parishes. The parish has approximately 32,000 parishioners.