Pope begins his visit to Sri Lanka and Philippines 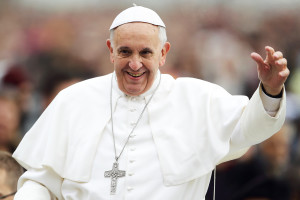 Pope Francis begins his week-long trip to Sri Lanka and the Philippines when he arrives in the Sri Lankan capital Colombo this morning.

He is due to address the bishops of Sri Lanka, pay a courtesy visit to the Sri Lankan president and attend an inter-religious meeting at the Bandaranaike Memorial International Conference Hall in Colombo on Tuesday evening.

The Pontiff will preside at the canonisation of Blessed Joseph Vaz at Galle Face Green in Colombo on Wednesday morning before visiting the Sanctuary of Our Lady of the Rosary at Madhu in the afternoon.

On Thursday he will fly to Manila and on Friday he will celebrate Mass with bishops, priests, and religious at the Cathedral of the Immaculate Conception in Manila.

Later on Friday he will take part in an encounter with families, while on Saturday Pope Francis will travel to Tacloban, one of the areas worst affected in November 2013 by Hurricane Haiyan.

There, he will celebrate Mass and have lunch with the poor and survivors of the typhoon at the Residence of the Archbishop of Palo.

Back on Manila on Sunday, the Pope will participate in an Encounter with the Youth at the Pontifical University of Santo Tomas in Manila.

He returns to Rome on Monday 19 January.

This is the Pope’s seventh apostolic trip of his pontificate.

The first stop on his two-nation journey is Sri Lanka where he will be welcomed by the Archbishop of Colombo, Cardinal Albert Malcolm Ranjith, and the President of Sri Lanka, Maithripala Sirisena.

Speaking to Vatican Radio, Cardinal Ranjith said that he hoped the timing of the Pope’s visit will help to spur the new government in its work of reconciliation after a 30-year civil war.

The Pope arrives in Sri Lanka shortly after elections that resulted in a change in government leadership.

Cardinal Ranjith noted in his Vatican Radio interview the oddity that in each case when a Roman Pontiff has visited the country — Popes Paul, John Paul II, and Francis—“the government that invited is not the government to receive him.”

The newly elected president has promised to works towards reconciliation on the island, where a decades long civil war ended in 2009.

The predominantly Buddhist Sinhalese make up about 75% of the population, with predominantly-Hindu Tamils being the largest minority group.

Catholics make up just 6% of the population, and are comprised of both Sinhalese and Tamils.

The Cardinal also noted the Pope wants to keep things simple, and to have contact with the poor and sick of Sri Lanka.

“We are happy he is taking that attitude,” said Cardinal Ranjith, “because it is I think an example to all of us, especially to us bishops, and Cardinals!”