Pope opens his fourth year with message of mercy 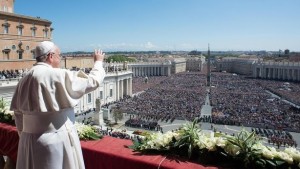 On Sunday Pope Francis began the fourth year of his pontificate and used his Angelus address to highlight the theme of God’s mercy, one of the signature messages of his papacy.

Addressing the crowds assembled in St Peter’s Square, the Pope spoke to them about Sunday’s Gospel reading on the woman caught in adultery.

The Pope said the story highlights the theme of the mercy of God, who never wants the death of the sinner but wants them to convert and live.

He asked the faithful present in St Peter’s Square to imagine they were witnessing the scene of Jesus, the woman and the crowd who want her stoned to death for her sins.

The Holy Father also underlined that the crowd had not come to Jesus to ask for his opinion but to cause him to fall into a trap.

When Jesus responds saying, “Let him who is without sin, cast the first stone at her” this “displaces the accusers” and disarms them, he stated.

They leave aware of their sins.

Like the Gospel reading, Pope Francis said, “we need to be aware of our sins and have the courage to drop the stones that we aim at others and think about the wrong we do”.

The Pope noted that when everyone has gone, it is just “the woman and Jesus: misery and mercy, facing each other.”

Putting this scene into the context of today, Pope Francis explained that it is like when we are in the confessional filled with shame. We see our own misery and we ask for forgiveness.

This woman, the Pope said, “represents all of us, sinners, that is, adulterers before God, traitors of his loyalty. And her experience is God’s will for each of us: not our condemnation, but our salvation through Jesus.”

Following the recitation of the Marian prayer, all those gathered in St Peter’s Square were given a copy of the Gospel of St Luke, donated by Pope Francis, with an invitation to “read it every day.”

In distributing the pocket-sized Gospel, the Pope urged the faithful to note the words of our Lord as recorded in Chapter 6, verse 36 of Luke’s Gospel, “Be ye merciful as your Father [in Heaven is merciful]”.

The volume is titled, St Luke’s Gospel of Mercy, chiming with the theme of the Extraordinary Jubilee Year of Mercy underway in the Church throughout the world.

Volunteers from the St Martha Pediatric Dispensary distributed the copies of the special edition to those present, with the aid of a number of grandparents from the diocese of Rome.

“How worthy are grandfathers and grandmothers who transmit the faith to their grandchildren,” said Pope Francis.

He also called the attention of the faithful to page 123 of the volume, on which the full list of the Seven Corporal and Seven Spiritual Works of Mercy appear.

“It would be nice that you should learn them by heart,” he said, “so as to make it easier for you all to do them!”

“I invite you to take this gospel and to read it, a little passage every day, so that the mercy of the Father might dwell in your heart and so that you will bring that mercy to everyone you meet.”