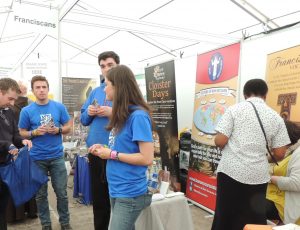 The National Ploughing Championships is where people are at, and a chance to meet and greet and even pray with them. This is according to the many religious orders, organisations and aid agencies present at the annual farmers’ event.

“It is an occasion where hundreds of thousands of people gather. Wherever people gather is the place to be and it is what Pope Francis wants us to do – to get out and be out among the people. It is really wonderful to see the number of religious stands that are here,” Bishop Fintan Monahan, Bishop of Killaloe, told Catholicireland.net.

Tullamore-born and having received his primary school education in this part of the country, he was back on home turf. Some areas in Co. Offaly are also part of his diocese, and he met many from the diocese at the event. Both he and Bishop Denis Nulty of Kildare and Leighlin visited on the first day.

Trócaire, World Meeting of Families 2018, Legion of Mary, Vocations Ireland, Jesuits, Presentation and Franciscans were among the dozens present.

On the Franciscan stand there were also OLA and Bon Secours sisters, and young people – some from abroad – with Net Ministries, which is working alongside Vocations Ireland this year. They offered visitors crosses and prayers and Blessed Salt which is used to bless the land as part of an ancient Irish tradition. Many people also asked for prayers.

“It’s amazing the number of people who just ask you to pray with them, about their troubles. One woman was really very upset and she said her husband was very ill,” said Margaret Cartwright, Director, Vocations Ireland. She has been at many events and religious conferences and fairs throughout the year to promote vocations.

“There has been a rise in people contacting us and seeking to discern whether they have a religious vocation. One or two have come from [reading] the website, but others from attending events where they met us,” she told Catholicireland.net.

“Because many really do not know if they want contemplative life or missionary or an apostolate, we recommend that they work with a spiritual director first. Then we can put them in touch with vocations directors of the different religious orders and let them choose.” 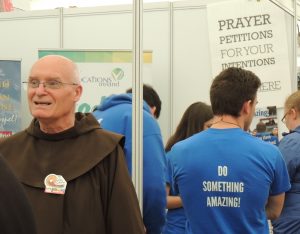 The Franciscan friars on the stand were very busy, but had an extra sense of joy due to increasing vocations for them.

“It is a very pleasant way to meet and encounter people,” said Fr Liam Kelly, who is from the friary in Athlone where there are six friars and three students who are studying in Maynooth. He added that three postulants were received into the community in Ennis on Tuesday (19 September), and there are four novices in Killarney.

“It is certainly encouraging for us. We are blessed with the men who have asked to be received [into our community],” he said. “We hope and pray they persevere. There is so much that can come down the road at them, but at the same time I find the lads that have joined are very eager to be involved in occasions like this. Very often we would have included them on the stand. They love interacting with people and from the very beginning of their formation, they are very outward looking.” 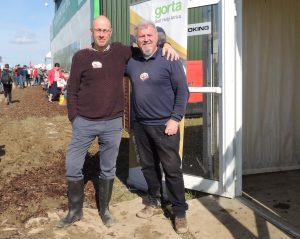 NGOs and aid agencies were also present, including Gorta Self Help Africa. The latter was founded by Noel McDonagh and Father Owen Lambert after the 1983–1985 famine in Ethiopia. It focuses on self-sufficiency through agriculture and is in ten African countries.

George and Dorothy Jacob were present to talk about the work of Goal.

“More and more our work is focused on helping rural families to grow more and earn more,” explained George Jacob, communications manager, Gorta Self Help Africa. Seeds and training on production irrigation and so on are provided and the next stage is getting the crops to market.

“Many farmers in Africa are challenged, because of the scale of production on small farms, to sell into markets outside of their own village or by the side of the road. So they have two, three or four acres. They are smallholders really.”

Agencies like Gorta help create links into such markets. When Diageo [Guinness] set up in Addis Ababa, Ethiopia, a deal was brokered for smallholders to supply malting grain for cash. The cash went towards feeding families who struggle to produce a year-round supply of food, with any surplus to educate their children.

On the stand at the ploughing were some samples of chia seeds, a so-called ‘super food’. The Healy group are working with farmers to produce the seeds and have a factory in Uganda to prepare the seeds for export to the UK and Ireland, all of which helps support 12,000 farmers.