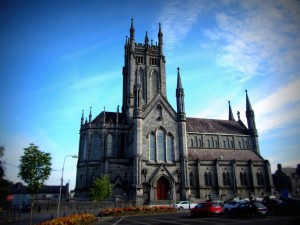 The Mayor of Kilkenny, Cllr Joe Malone, recently travelled to Minnesota to celebrate the ‘Half Way to St Patrick’s Day’ celebrations and to forge links between the two Kilkenny towns which were twinned in 2012.

Speaking to CatholicIreland.net he said, “It was nice to go over there and make connections with the place. I got a great welcome and the people there are very interested in Kilkenny in Ireland.”

“Many of them are of Irish descent and when you visit a graveyard there and look at the names on the headstones you could easily think you were in Ireland. I visited the graveyard after Mass and was really taken by the amount of Irish names.”

Of the unique twinning between the two cathedrals he explained that while in the US he met tourist representatives and also visited St Paul’s Cathedral and spoke about his plans to twin both Cathedrals.

“I met with the Archdiocese in relation to the twinning and issued an invitation to dignitaries and the local community to visit Kilkenny during the 1916 [centenary] celebrations. I hope the twinning will happen sooner rather than later now.”

He added, “There are many people whose ancestors are from Kilkenny in Ireland buried in St Paul’s Cathedral graveyard so it would make the twinning even more special.”

Mayor Malone said that the highlight of his visit was “going to St Paul’s Cathedral and sitting in the same pew that the late President John F Kennedy sat in way back in October 1962 while he attended Mass there. It was a special moment and one I will never forget”.

The Cathedral in Minnesota is set dramatically on Summit Hill overlooking the city of Saint Paul.

The Cathedral’s Beaux Arts architecture, inspired by the churches and cathedrals of France, is characterised by rounded domes and arches, a symmetrical cross floor plan and clean, straight lines.

Decorative elements are grouped at certain points around the Cathedral-the façade, towers, sides, entrances and dome.

The Cathedral’s most prominent feature is a 120-foot-wide dome made of curved steel beams, covered with a clay tile surface and overlaid with copper.

A copper-clad lantern, approximately 30 feet tall, sits on top of the dome. From the base to the very top of the lantern, the Cathedral stands 306 feet tall.