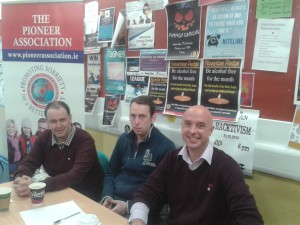 Thirty young students at NUI Maynooth responded to the recent promotion by the Pioneers of the short-term pledge for November.

Many more may also be taking the pledge privately without signing up.

The Pioneer Total Abstinence Association visited the campus to promote the pledge for November and Advent.

“Overall there were about 30 people who took on the commitment. I was surprised at that myself. A lot of people do it themselves without actually signing on to the Pioneers,” Raymond O’Connor told CatholicIreland.net.

“We explained what the Pioneers is about and that there is a spiritual aspect to it as well and they were interested in the short-term pledge. Some never heard of us and didn’t say why they were doing it, they probably had different reasons and motivations but it was good to see that kind of enthusiasm.”

The short term pledge is promoted by the Pioneers at Lent and then at Advent.

In Maynooth, Raymond O’Connor felt there was more enthusiasm this year compared to the last visit in Lent which was facilitated by the university’s Pioneer centre.

The Pioneers collate the number of those who sign up online but many more do so in their local parish and through other organisations. 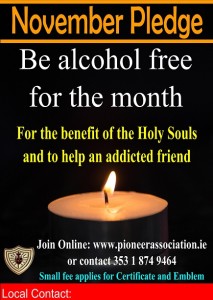 This year so far 93 people signed up for Lent and the numbers for November are not yet completed.

“There was a spike in the last few days of October in terms of people signing up – at least 30 applications,” he said and that was only on the website and did not include the Maynooth students.

He added, “What we are promoting is to do it for the Holy Souls and members of a person’s family who has died, the dearly departed, and for people who do have problems with drugs and drink and to offer it up for them to help them on their journey.”

According to Raymond O’Connor there is more need than ever to abstain from drink, especially in the wake of the court case in Portlaoise which saw a man sentenced to seven and a half years in prison after causing an accident while drunk which caused the death of four-year-old Ciaran Treacy.

The Pioneer website offers details of how to sign up for the November pledge (and beyond if required).

This involves abstaining from all alcoholic drink, wearing the Pioneer pin and praying the special Pioneer prayer twice daily.