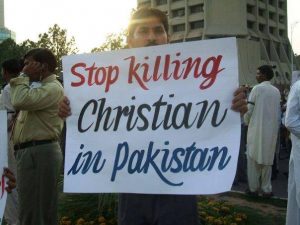 Though Christians in Pakistan are suffering frequent persecution, the country, which is predominantly Muslim, has seen a great increase in vocations to the priesthood and religious life in the Catholic Church in recent years.

Fr Inayat Bernard, Rector of the Santa Maria Minor Seminary in Lahore, described the increase was “a sign of God’s blessing” who is “always close to his people.”

Fr Bernard, who leads 26 young seminarians, said there were 23 priestly ordinations, including diocesan and religious priests, since the beginning of 2015 to date.

Another 15 new deacons are preparing to be ordained in 2016.

Meanwhile, 79 major seminarians are studying at the Karachi National Institute of Theology, and 96 at the major seminary dedicated to St Francis Xavier in Lahore.

Fr Inayat said there were also many new vocations in women’s religious orders, “a sign of hope that instils confidence and courage even in difficult moments.”

“It is true that the Christian community, in the complex socio-political situation in Pakistan, sometimes suffers from discrimination or incidents of violence, such as the attack which took place at Easter in Lahore, while terrorism strikes indiscriminately religious, civil and military targets,” he said.

“But these difficulties do not affect our freedom and the faith of the people, but strengthens it and today we are appreciating the fruits.”

“It is true that martyrdom, which we sometimes experience, is in itself the seed of new Christians and remains a gift of God that only through faith one can understand and live,” he concluded.