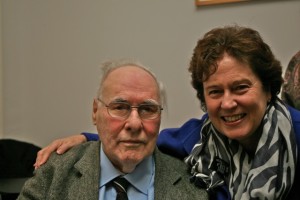 “An excellent and immensely timely book” is how the Master of St Benet’s Hall in Oxford University described Irish theologian Fr Gabriel Daly’s new book ‘The Church always in need of reform’.

In his address to family, confreres, colleagues and friends gathered at the Irish School of Ecumenics, Professor Jeanrond stated, “Theoretically, nobody of sane mind would ever deny the need for church reform. However, given the ambiguity of all human institutions, the church means different things to different people.”

He said that to conservatives and progressives alike, Gabriel Daly’s book presents a challenge because in it he destroys any expectation of comfort emerging from our different images of church.

“Instead Gabriel asks all of us to consider what it means that the church is an organism at once enabled and limited by space, time and language. The church is a historical phenomenon which at best proclaims God’s eternal presence in our universe and at worst proclaims its own imagined past glories,” he said.

Thanking the Irish Augustinian priest for “a wonderful and beautifully written book” and for all who joined in celebrating Fr Daly’s theological and literary achievement, he mulled what this manifesto on church reform might mean for us today.

Fr Gabriel Daly’s book tries to present a way forward by reminding us that we do not actually believe in the church, but in God and Christ with – and at times – even against the church, he said.

Elsewhere in his address, Professor Jeanrond described the book as very much in line with the present Pope’s thinking and acting. 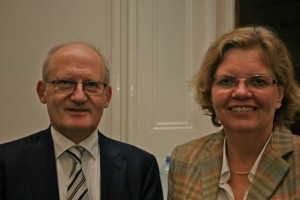 “Both Gabriel and the pope redefine the meaning of orthodoxy. Questioning failing structures and policies in the church does not only not amount to disloyalty, but may well be the most promising form of loyalty,” he suggested.

Referring to Fr Daly’s step by step discussion of the failures of the Magisterium and its agents to come to terms with the Enlightenment and resulting modernity and postmodernity, he said that when the church is understood in terms of an anti-world rather than as the salt of the earth, it is on its way to becoming a sect.

“Neo-Scholasticism was the ideology of this sectarian understanding of the church. The great achievement of Vatican II was the silent burial of this ideology.

He said Vatican I and subsequent papal statements had enforced this ideology, yet Vatican II attempted to reform the church.

“However, the pontificates following Vatican II inaugurated a new ice-age in the church’s internal organisation, command and communication structure.”

“They no longer enforced the neo-scholastic ideology just buried, but they preserved the centralism, clericalism and authoritarian system once created to sustain it. Thirty-five years of necessary reform efforts were tragically lost as a consequence.”

“Today’s traditionalists have every right to hold reactionary opinions; they have no right to impose them on others, in the name of a false conception of orthodoxy and authority.”