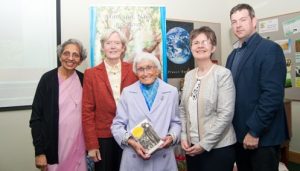 Ahead of the tercentenary of the birth of Venerable Nano Nagle in 2018, an 86-year-old Presentation Sister has penned her first novel retelling the story of the remarkable Irishwoman whose legacy is still making itself felt in 23 countries around the world.

Australian, Sr Noela Fox, flew into Ireland recently for the launch of ‘A Dream Unfolds’ by Columba Press at the Nano Nagle Centre in Ballygriffin, Co Cork.

The novel recounts the life-story of the foundress of the Presentation Sisters in a readable style likely to capture a wider audience.

Speaking at the launch, Sr Anne O’Leary of the Presentation Congregational Leadership Team said, “A Dream Unfolds comes at just the right time. We can indeed say ‘Cometh the hour, cometh the book!’”

Nano Nagle was declared Venerable by Pope Francis on 31 October 2013.

“In just two years’ time – 2018 – we will celebrate the tercentenary of the birth of Nano in 1718. ‘A Dream Unfolds’ is a wonderful resource to engage a new generation, and especially young people, with the life and mission of Nano.”

“Nano’s story is a true love story for today. It is indeed providential that she has been declared Venerable by Pope Francis. Francis’ intense interior life of prayer, his reforming pastoral zeal and his concern for people at the margins mirror the life of Nano.” 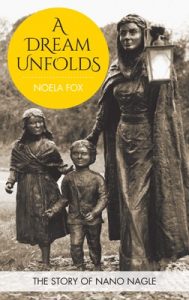 Sr Noela Fox was born in a small country town in New South Wales in Australia.

After completing primary school locally she entered the Presentation Convent at Mount Erin which was founded from Kildare town in Ireland in 1874.

She joined the order straight from school and taught in Presentation schools around New South Wales and later lectured for 10 years in Religious Education and History at the Australian Catholic University.

In retirement, she taught inmates in a men’s prison, worked with refugees, and on Aboriginal reconciliation.

Columba Press describes Sr Noela’s book as a “moving testimony to Nano Nagle’s life’s work. Not only does it pay tribute to her many achievements, it also creates a portrait of her that is immensely relatable. Nano is depicted as warm and loving, someone with great wit and a wry sense of humour who is capable of being obstinate and forceful when the occasion calls for it.”

According to the publishers, alongside this humanity, are the qualities that make her such a “remarkable and trailblazing figure in Irish history: her strength, audaciousness, prudence, compassion, persistence and, above all, her unshakeable conviction that God would bring her dream to fruition.”

Speaking about the experience of writing her first novels, Sr Noela commented, “Although to date I had written only historical books, including books on Nano’s life, I decided to take up the challenge to write this novel.”

She said that it was to her surprise, after submitting the required outline and a couple of chapters, I and another writer, were shortlisted by Columba Press and the panel, and asked to submit further chapters.

It was after this she was selected as winner of the challenge.

“I have enjoyed the writing which I found vastly different to writing history where one writes as an outsider, an observer and a commentator, to writing a novel where one becomes a participant, writing from the inside, so to speak,” said Sr Noela.

Of her voluntary work teaching literacy to inmates in a men’s prison, and working with refugees, and for Aboriginal reconciliation, Sr Noela recalled for CatholicIreland.net how she received a phonecall in the mid 1990s from the government department of education and aboriginal affairs shortly after she had retired to Wagga Wagga from lecturing in history.

“They had heard about my interest in indigenous people and so they rang me and asked would I go out to a men’s prison which was about an hour out of Wagga Wagga to teach the indigenous people there to read and write as many were illiterate.”

“I thanked them for asking me but declined. I had never been in a prison and I told them that I really didn’t feel I could do that work.”

“I began to write again after the phonecall and then thought, ‘oh dear – what would Nano Nagle say… she visited the prisons – she would be so ashamed of me’. So I rang them straight back and I would do it but would only stay until they got someone else.”

Sr Noela never asked or allowed the prisoners to tell her their crimes. She also insisted on taking the inmates on an individual basis. “I ended up by having all the different colours under the rainbow – coming to me. Often they didn’t want to learn – they wanted someone to listen to their story.”

She believes that more listening is needed in society generally as many people are feeling alone, particularly the elderly with no one to visit them and the refugees that have sought asylum.

Of her work in reconciliation, she says there is still some antagonism towards some aboriginal people even in Wagga Wagga.

“She and other Presentation Sisters always try to smile and stop and have a yarn with the aboriginal people if they want. This woman said one day that her husband came home and told her this woman had smiled at him. ‘It must have been one of those Presentation mob!’” he concluded.

“I think smiling or having time are important. That is what Nano had – time. It’s a message for our times. To smile, be pleasant to people, and to listen.”

A Dream Unfolds: The Story of Nano Nagle is published by Columba Press. http://www.columba.ie/index.php/a-dream-unfolds.html