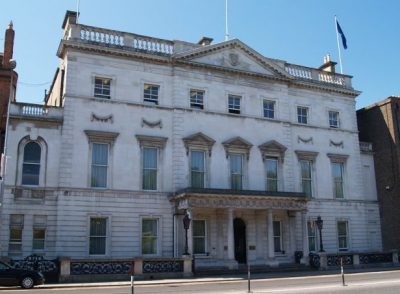 Ireland’s church leaders met with the Tánaiste and Minister for Foreign Affairs Simon Coveney in Dublin this week to discuss growing concerns about the political stalemate in Northern Ireland.

The Stormont Assembly hasn’t met for well over 600 days since a scandal about the management of a green energy incentive scheme led to the collapse of the power-sharing government there.

The day before the representatives of the Catholic, Church of Ireland, Methodist and Presbyterian Churches met with An Tánaiste in Dublin, the status of Irish in Northern Ireland was debated in the Westminster Parliament, with Plaid Cymru MP Liz Saville-Roberts addressing the British Parliament as Gaeilge. It’s the first time Gaeilge has been spoken in the British Parliament since 1901.

Pointing to the commitments made in the 2006 St Andrew’s Agreement, the Welsh MP called on the British Government to impose an Irish Language Act on Northern Ireland if power sharing is not restored within the next six months.

The four church leaders said they were concerned that the absence of devolved government in Northern Ireland was affecting many areas of community life, public service delivery and cross-border cooperation.

“We conveyed these concerns to the Tánaiste, while emphasising the importance of continuing to build relationships and trust among all concerned, even in these difficult times,” the church leaders said. “We also welcomed the opportunity to hear the Irish Government’s assessment of the current situation.

“While not underestimating the challenges involved in moving forward, we emphasised the importance of dialogue and finding the space that encourages engagement and participation. As we had done with the political parties and the Secretary of State previously, we reiterated our willingness and desire to assist in the process where we could.”

The Church leaders present were Monsignor Joseph McGuinness, diocesan administrator for the Diocese of Clogher (representing Archbishop Eamon Martin of Armagh, the Primate of All Ireland), Church of Ireland Archbishop of Armagh Richard Clarke, President of the Methodist Church William Davison, Moderator of the Presbyterian Church in Ireland Rev Dr Charles McMullen and the President of the Irish Council of Churches Rev Brian Anderson.