As the Police Service of Northern Ireland (PSNI) struggles to recruit sufficient Catholics to constitute a representative police force, Archbishop Eamon Martin of Armagh has said that “our very best young people” are needed to join the police.

The Primate of All Ireland made his comment in a Tweet issued following a meeting between the Irish Council of Churches and the new PSNI Chief Constable, Simon Byrne. The Primate wished the Chief Constable “every blessing in his leadership role”. 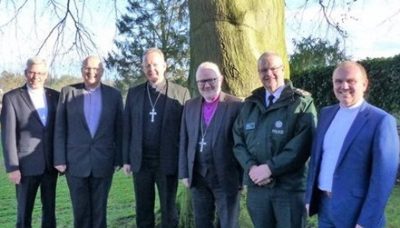 The Irish Council of Churches regularly meets with Northern Ireland’s police chiefs and the latest meeting took place on Saturday in Armagh. At the get-together, the church leaders were unanimous in their support for policing, especially community policing.

Having a police force that reflects Northern Ireland’s community is a difficult issue.

Previously, the Royal Ulster Constabulary (RUC) was seen by some as a “Protestant force for a Protestant people” and it did not enjoy the support of the Catholic community. As part of the Good Friday Agreement, a new police force, the PSNI, was formed in 2001.

In order to increase the representation of Catholics among police officers, a 50/50 recruitment quota policy was applied, with 50 per cent of all new police officers coming from the Catholic community. This policy, which was in place until 2011, was resented by some elements of the community, who saw it as a form of favouritism granted to Nationalists/Catholics.

Two months ago, former PSNI Chief Constable Sir Hugh Orde said he believed the 50/50 recruitment policy needed to be reinstated because, if current recruitment trends continue, the overall number of Catholics in the police force will decrease. Sir Hugh also warned that overall the number of police officers serving in Northern Ireland was lower than that recommended by the Patten Commission when the PSNI was formed in 2001. Sir Hugh says that the force is 800 officers below the level it needs to be to cope with the growing threat from republican dissidents.

These dissidents are hampering the recruitment of Catholics into the police, as those who join the force are often subject to intimidation and threats of violence to their families.

The current Chief Constable, Simon Byrne, is against reintroducing recruitment quotas and he has called on community leaders to encourage young people to consider a career in the police. In response to Archbishop Martin’s Tweet, the Chief Constable commented: “Thanks for such clear encouragement and support.”