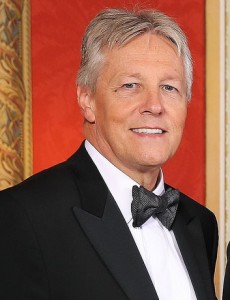 Mr Robinson (67) who is an MLA for East Belfast and is due to retire later this month, has been recognised for his political contribution over four decades.

The citation for the award hails his role in the formation of the coalition government at Stormont, most notably overseeing the devolution of policing and justice powers from Westminster to Stormont in 2010.

It reads, “Mr Robinson has been involved in Northern Irish politics for over 40 years, being a founding member of the DUP, and was the leader of the Democratic Unionist Party (DUP) from 2008 to 2015.”

“On 5 June 2008 he was ratified by the Northern Ireland Assembly as First Minister with Sinn Fein’s Martin McGuinness as Deputy First Minister.”

“In February 2010 Robinson and McGuinness oversaw the devolution of policing and justice powers from the British Parliament to the Northern Ireland Assembly, negotiating a power-sharing deal with Sinn Fein. This process ensured that devolution in Northern Ireland was able to be fully completed.”

The Tipperary Peace Convention said the winner will be announced in the coming days and the award will be presented by convention secretary, Martin Quinn, during a special ceremony at Ballykisteen Hotel just outside Tipperary town later this year.

Humanitarian, entrepreneur and adventurer Chris Catrambone and his wife Regina, who founded the Migrant Offshore Aid Station (Moas), have also been shortlisted.

The couple, who invested $8 million and bought a 40m rescue boat, two drones, and hired a 20-person crew including sailors, rescuers, doctors and paramedics, have saved nearly 12,000 people stranded during dangerous migrant crossings in the Mediterranean.