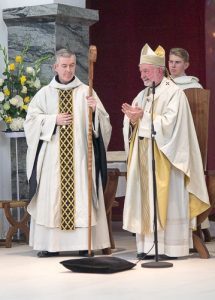 The sentence from Pope Francis, in his Apostolic Letter for the Year of Consecrated Life, was quoted by the Most Reverend Kieran O’Reilly, SMA, Archbishop of Cashel and Emly, at the blessing of the new Abbot of Glenstal, Brendan Coffey OSB. The blessing took place in the abbey church on Saturday 5 November.

Highlighting in his homily the heritage of Glenstal and the Benedictine spiritual tradition, the Archbishop encouraged the monks to allow the new phase in their community’s life inaugurated by the choosing of a new abbot to be a time of renewed reflection on their own calling and role in the community. 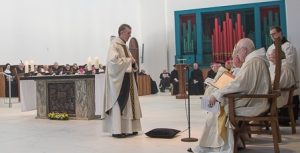 The Archbishop invited Abbot Brendan Coffey and the Glenstal community to be part of an upcoming biblical initiative in the diocese.

“We are truly blessed in this diocese to have a community devoted to the Office and the Sacred Scriptures,” he said. “When I came to this archdiocese I stated that I would like to broaden the biblical apostolate here and it is with this in mind that I invite you, Abbot Brendan, and your community, with the priests and people of the archdiocese, to undertake with me a journey of discovery and rediscovery of the Sacred Scriptures.”

Abbot Brendan Coffey addressed the congregation, asking for prayers, and citing St Bernard’s advice to new abbots – “Notice everything. Turn a blind eye to some things. Correct a little. Cherish the brethren.” 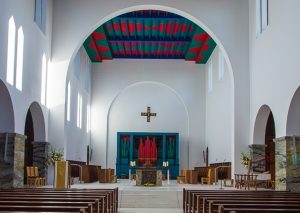 Even though Fr Brendan Coffey was elected Abbot of Glenstal twelve weeks ago, the community waited until after the completion of the current phase of the renovation of the church before celebrating the solemn Rite of Blessing of an Abbot.

The Glenstal community was joined in choir by 25 abbots, abbesses, monks and nuns from Benedictine, Cistercian and Poor Clare monasteries from both Ireland and abroad.

They included the Abbot President of the congregation, Abbot Ansgar Schmidt OSB from Trier, Germany, and the Abbot of the monastery that founded Glenstal, P. Abbé Bernard Lorent OSB from Maredsous, Belgium. 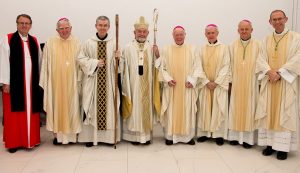 The Rite of Blessing took place after the Gospel. Abbot Brendan was escorted to the Archbishop by his two immediate predecessors, Frs Christopher Dillon OSB and Mark Patrick Hederman OSB. The Prior of the monastery, Fr Senan Furlong OSB, then formally presented the Abbot to the Archbishop and asked him to confer the blessing.

Archbishop O’Reilly, in the Examination of the Abbot, questioned Abbot Brendan Coffey and invited him to commit himself to observing the Rule of St Benedict and to teaching the brethren to do the same, so as to “encourage them in the love of God, in the life of the Gospel, and in fraternal charity”.

Then the Archbishop invited everyone present to pray for the new Abbot who prostrated before the new altar, while the chanters intoned the Litany of the Saints.

The solemn Prayer of Blessing followed and the newly-blessed Abbot Brendan was then presented with various symbols related to his office: a copy of the Rule of St Benedict; a silver ring as a sign of fidelity; and a wooden crozier.

The crozier was presented by the Archbishop, who said the Abbot should: “show loving care for the brothers whom the Lord has entrusted to you; for he will demand an account of your stewardship”.

After applause from the congregation, Abbot Brendan received the sign of peace from the Archbishop and his assistants, before moving into the centre of the choir to share a greeting with all of the monastic men and women present. 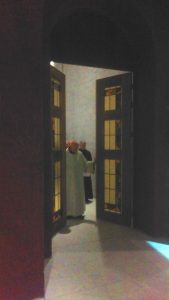 Doors open for first time in the newly renovated church.