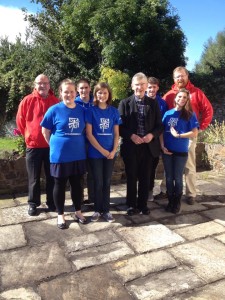 Five young people from three continents have arrived in Cork to work with young people in parishes, schools and communities.

This is an initiative of the Missionaries of the Sacred Heart (MSC) and Dominicans who had seen some young people from *NET (National Evangelisation Teams) in action previously and invited a team to work in Cork for a year.

The NET team of Australian, Canadian, American and Irish members had their first children’s liturgy on Sunday (4 October) just 10 days after arriving.

Lizzie Schuh, one of the team, arrived from Brisbane, Australia, a few weeks ago.

After a training period with NET she and the team are went to Cork.

“A lot of my friends have done it and it was something that I was really feeling called to,” she told CatholicIreland.net.

A chance meeting with the NET director for Ireland and she knew Ireland was for her. “I felt it was really cool that I was going to give up a year and come over here,” she said.

The team have been busy setting up a parent and toddler group at the MSC, and with the Dominicans they have been doing religion classes in schools.

They are looking at setting up a youth club on Friday nights and a young adult group for the 18 to 25 age group on Saturday afternoons. They will also be involved in youth choirs and children, family and youth liturgies on Sundays.

“We are very busy, but as a team we want create a regeneration of the Catholic church and bring young people back. The mission statement of NET is to encourage people to love Jesus in the church,” she said.

She finds the weather in Ireland cooler and the people friendly. Seeing Irish education for the first time she says that, the mainly Transition Year students that the team have worked with, are not initially interested in religion but the team tries to make it more “fun” and to meet in smaller groups to get to know they young people.

“The school system (in Ireland) is different (to that in Australia) but young people’s attitudes towards the church are not all that different. To me it appears that young people are going to church or not, because it is something that their parents do. They haven’t really had their own personal encounter with Jesus,” she said.

“It’s not something they really understand, or they loose interest. What we are hoping to show is that they are loved by Jesus and they can have a personal relationship with Jesus.” 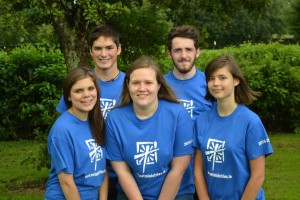 The NET Ministries team in Cork

NET Ministries has been in Ireland for some time and there are teams, like this one in Cork, in Athenry, Dunshauglin and a team that moves around Ireland doing retreats and other meetings.

Seeing NET Ministries in action on a short retreat prompted Fr Maurice Colgan, a Dominican, to invite them to work in Cork for a year and Fr Alan Neville MSC is also involved.

“We felt that their dynamism, youthfulness, eagerness, their faithfulness is very attractive and very life-giving,” he told CatholicIreland.net.

“They bring something that is so needed in the Irish church today – youth but also faithfulness. They are committed Christians themselves and they are committed to the Holy Father and that is rare having that commitment and that desire for mission.”

He said they have been making their presence felt and, having introduced themselves at the end of mass last week, two teachers immediately invited them to teach in their schools and they have already spoken in one of those schools. The leader of a youth choir also asked them to help.

Fr Colgan explained that NET ministries will be in Cork for the year at least and maybe more.

He hopes that they will do as they have done in other parishes previously, and establish ongoing ministries and initiatives which will be run by local people for local people long after NET ministries have moved on.

*NET (National Evangelisation Teams) is a Catholic peer to peer youth ministry that puts into action the Church’s mission to promote and develop the faith of young people.

With its Irish headquarters in Donegal, NET operates throughout Ireland offering retreat encounters to schools, parishes and interested youth groups.