Organised by the Missionary Society of St Columban as part of its centenary celebrations, the international colloquium was aimed at mapping out the future direction of mission in the Church.

The discussion brought together international leaders and practitioners of mission from the global church – from Ireland, Europe, Asia, the Americas and Africa – including seven superior generals and two vicar generals from nine international missionary societies.

One of the major themes to emerge from the two days’ of discussion was the need for congregations to grapple more deeply with interculturality as a counterpoint to the trend towards borders and nativism within wider society.

Speaking to Catholicireland.net, Sr Nonie Gutzler, President of the Maryknoll Sisters, said the challenge of interculturality was something her congregation was already working on.

“The influence of the Western Church has to diminish as we bring in the voices of other cultures and I think that is something that we need to work on as a congregation because we have experiences in so many different parts of the world. Even in our prayer and our expressions we are trying to become less and less Western.”

She explained that while the United States has been very multicultural, which is living together in places in harmony, this was not interculturality which is about allowing oneself to be changed by other cultures. 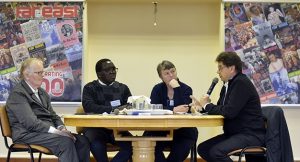 “Right now, in the States there is the fear of the other and that is a big challenge. The move to interculturality will help people meet on a deeper level. On a basic human level, we all want love, peace and harmony with our neighbours.”

Fr Stanley Lubungo, Superior General of Missionaries of Africa also found the discussion on interculturality important because in his congregation, which has over 1,300 members, there are 35 different nationalities.

“The difference between interculturality and multiculturalism is important. We can pretend to be living interculturality but we don’t actually meet each other at the cultural level. I think we need to dialogue more. Traditionally the majority of our confreres came from the West and they have done a lot of good things but I’ve been asking myself what has Africa to offer to the rest of the world – it calls me to be more authentic as an African. There is a need to have some real dialogue which would allow us to meet at a cultural level.”

49 year old Fr Lubungo said he had also been struck by other missionary congregations’ experiences in integrating lay people in their mission.

“We have a number of friends who have been fascinated by our way of life but we haven’t yet really thought of how they can participate with us in mission. We have had associate members but it was only for a period of time. I have seen what the Columbans and the Pallottines are doing and this is something that our congregation can really look towards – it is a way of allowing others share our charism and keep our charism alive.”

Archbishop Kieran O’Reilly, who was congregational leader of the Society of African Missions before he was appointed Bishop of Killaloe, and later Archbishop of Cashel & Emly, said an issue which struck him as a returned missionary was that despite the return to Ireland of many missionaries it didn’t seem to have such an impact on the Church in Ireland.

Attending the colloquium as chairperson of the National Mission Council, the Archbishop told Catholicireland.net that with many missionaries returning to Ireland, “There seems to be a vast amount of experience but somehow it hasn’t translated into the life of our Church. That has left me asking why and what didn’t happen here in order to be able to allow those experienced people to be more a part of the Church.”

He paid tribute to those missionaries who “laid the ground for Laudato Si” and others who got involved in ministries with migrants. “In many places missionaries were the first ‘welcomers’ on the Church side.”

Sr Mary T. Barron OLA, the Irish-born vicar general of the Missionary Sisters of Our Lady of Apostles, said there were many similarities in the issues coming up for congregations around commitment to the poor, commitment to justice, commitment to ecology and “our way of living together as different nationalities”. One the issue of interculturality, she acknowledged that it was something which the OLA “want to do better”.

Hearing other’s experiences was “almost an affirmation of the journey that we’ve made so far, to continue that process because it is a great witness in today’s world – that ability to live together at an authentic level – meeting each other and trying to forge something different and with no dominant culture dictating everything.”

At 49 years of age, she is one of the youngest missionaries in Ireland. Sr Mary had served in Tanzania and then was based in Ireland for 10 years before she took up her role as vicar general in Rome. Of the atmosphere in the Church in Ireland, she admitted that it “saps your energy”.

“There is a fear of dying. Since I joined in 1992, I knew I was the last OLA to join in Ireland but I’ve never had a preoccupation about what the future will be because I am part of an international group – I would have a great trust in whatever is meant to be is going to be. As long as we are faithful and live as best we can, let God worry about all the rest.”

“We have great growth in Africa; if we are faithfully living our mission and if it is meant to be, then we will have some growth in Ireland again and if we are meant to die out in Ireland, so be it. We can only be faithful to what God has asked of us and we’ll let God worry about all the rest.”

Fr Kevin O’Neill, Superior General of the Columbans, described the colloquium as “a wonderful opportunity to come together with missionaries from different congregations and different parts of the world to celebrate our lives together as missionaries – to see where we are moving in the future.” 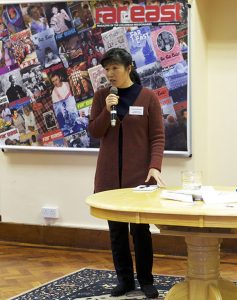 The Hong Kong-based Australian said it was “inspiring to see that we’re on the same page – we are all dealing with the same issues in the world”.

He identified the issues of importance to the missionary movement as ecology and the need for an ecological conversion, climate change and biodiversity, working for rights of migrants, refugees and asylum-seekers and creating spaces in society and particularly in the Church for those whose voices aren’t being heard – in particular women in the Church, young people and those who are on the margins of society.

He also expressed a concern that “there is so much against life, against hope and there is a lot of fear in the world. We need to come together to be able to provide hope and courage, peace and justice, to build communities of love around the world.”

“I think it is wonderful that we’ve been able to celebrate this colloquium in our centenary year. To have a colloquium like this is an energising time and a time to know that God’s mission is here for us to participate in – it’s God’s mission; it will always be here and we need to share in that together.”