Home > News > Mission DVD to be seen in parishes and schools

Mission DVD to be seen in parishes and schools 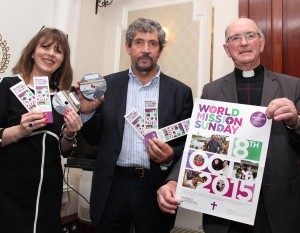 World Missions Ireland is preparing to distribute copies of a new dvd to the country’s 3,200 catholic parishes in time for Mission Sunday as part of a new initiative aimed at informing the faithful about the ongoing contribution of Irish missionaries.

It will be shown in churches and parishes on 18 October and in hundreds of schools across the country during the course of October which is mission month.

Recalling the trip to record the footage, Charlie Bird said on Tuesday, “It was an amazing experience and I met so many remarkable missionaries doing incredible work.”

The former RTE correspondent told CatholicIreland.net that he is a humanist but felt that though the Catholic Church has had its difficulties, that shouldn’t take away from “the excellent work of Irish missionaries. They are incredible people, doing incredible work.”

During the his travels for the film, the journalist learnt from four Filipino missionaries that his reports on the trial of Irish Columban, Fr Niall O’Brien and the Negros Nine, 31 years ago was instrumental in inspiring the young men to join religious life.

Fr O’Brien was falsely accused of murder by the Marcos regime. “It was my first big international story,” Charlie Bird recalled.

He added, “The one thing that struck me forcibly all those years ago was the commitment of the Irish missionaries in the Philippines to the cause of social justice – standing side by side with the oppressed sugar workers on the island of Negros.” 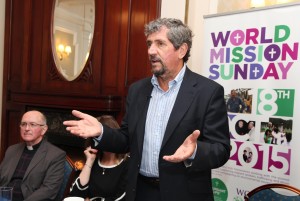 In 2015, he met equally dedicated Irish missionaries such as Fr Shay Cullen, fighting child abuse and prostitution through his PREDA Foundation; on the island of Cebu in the Philippines, he met Sr Evelyn Flanagan, a Presentation nun from Galway, who works on a project with the Sea Gypsies or Badjao Tribe, one of the most oppressed ethnic groups in South East Asia.

“There in the middle of them was this remarkable nun from Galway,” the journalist explained.

“We visited several projects including a cemetery in Manila which is home to 2,000 people who have nowhere else to live; we visited the first and only shelter in Seoul for people living with Aids; and one evening in the centre of Seoul I watched a group of Columban priests say Mass for the parents of the victims of the South Korea ferry disaster.”

“Perhaps one of the most unusual things I filmed was on the island of Jeju where an Irish Columban missionary, Fr Pat Cunningham, was taking part in a protest against the building of a military naval base.”

“I met so many missionaries during our trip and it was an amazing unforgettable experience.”

Speaking to CatholicIreland.net, Charlie Bird commented, “For me as somebody from outside the Church looking at the Church, this is what is important about it – there are people still doing really fantastic work.”

Asked why he agreed to do the film, he responded, “For 38 years I worked in RTE so I had a fantastic career and it is nice to give something back.”

Sally McEllistrim of WMI told CatholicIreland.net that aside from the dvds, the film can be seen on the websites and Facebook pages of World Missions Ireland, Misean Cara and the IMU.

She said the message of the dvd was that “Irish missionaries are the unpaid ambassadors for Ireland”.

“They have gone everywhere. A priest in Malawi told me once that every person he knows had either been brought into life by an Irish missionary nurse or a doctor or had been educated and helped by Irish missionaries.”

“As Mary McAleese said a number of years ago: ‘They stayed, they served and they suffered.”

Referring to the footage, she said something Columban missionary Denis Monaghan had said stood out for her.

“He said missionary work is like shovelling light into a dark hole – I think that is the most wonderful analogy for mission: it is giving hope and giving joy. Our theme this year for mission Sunday is abundant life – that is a person’s right to a dignified life, to work, to practice his or her faith openly and freely and just have God-given dignity.”

National Director of World Missions Ireland, Maurice Hogan SCC, described the film as “a fresh approach to allow Irish Churchgoers see the hugely important work of our missionaries abroad and the difference they make to the lives of those they serve”.

He continued, “Irish people do indeed have a long tradition of supporting missionaries abroad, for this we are very grateful, and we believe that our DVD will show them that their help is still very much needed and valued as it does bring the work of missionaries to life.”

“We are sure that people will be hugely moved by the incredible dedication of our missionaries; their role may be described as conduits that allow rays of light, warmth and joy to penetrate a world without windows, doors or skylights, a world too often nowadays experienced as dark cold and claustrophobic.”

The film can be seen here: