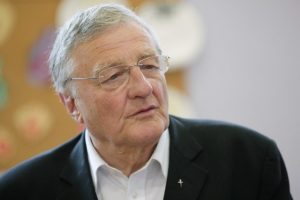 A proposal by a Methodist minister to create a special day designated in Northern Ireland to remember all of those who lost their lives in the Troubles there has been given a guarded welcome by representatives from various churches.

The proposal was made this week by Methodist Minister Harold Good who, along with Catholic priest the late Fr Alec Reid, oversaw the decommissioning of the Provisional IRA’s arms.

Rev Good emphasised the importance for all, including the churches, to reflect on their sins of “commission and omission”.

He told the BBC’s Sunday Sequence programme: “We were silent when we should have spoken. There was injustice, there was discrimination, there was sectarianism from both sides. Where there was injustice, where there was sectarianism, we were silent. Together across our community we might come together, each of us and all of us, from all sectors including the churches and acknowledge our part in the hurt, the grief and the pain of the past 48 plus years.”

The idea has also received support from the Catholic Church. Ballyclare priest and leading ecumenist Fr Martin Magill said he had contacted Rev Good to “explore the comments further”.

Fr Magill, who with Presbyterian minister Rev Steve Stockman co-founded the 4 Corners Festival promoting unity and reconciliation in Northern Ireland told the BBC: “I know he would be very keen to see that it wouldn’t be set entirely in a church context but in a much wider context to give all of us an opportunity to reflect and to think and to acknowledge our faults and failings. As he quite rightly says, there is a day of acknowledgement every Sunday when there is recognition of sins of omission and commission.”

He added: “It is essential that all the different parties work together to choreograph the thing [day of acknowledgement], otherwise it would be a disaster. While we remember the big headlines, we forget so much. Acknowledgement has to be about acknowledging all that has been forgotten, all of those people who had been forgotten.”

The idea of a day of acknowledgement was also tentatively backed by Methodist minister Rev David Clements. While expressing reservations that such a day could be seen as suggesting a kind of “equivalence” between perpetrators and victims, he said he could attend such an event. Mr Clements, whose policeman father was murdered by the IRA in 1985 at the gates of Ballygawley police station, said the issue was “thorny and difficult. Sometimes people say, ‘We’ve all suffered from the Troubles’. On a superficial level that’s true but on a more profound level it’s not. As Marie Smyth once wrote, ‘In some places, the suffering is clotted thick’. You flip that coin and if we haven’t all suffered to the same degree, we haven’t all been guilty to the same degree.”