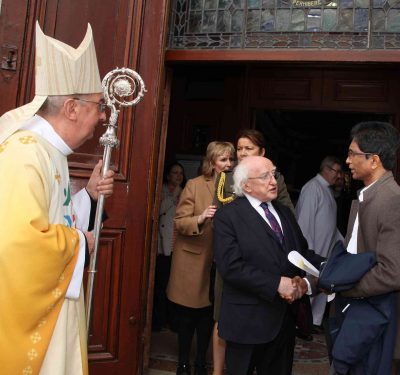 Prayers were said for the people of Sri Lanka at Masses and church services in Ireland, and across the world, yesterday.

No public Masses were celebrated in Sri Lanka, because of a fear of further bomb attacks. On Easter Sunday, more than 250 people were killed in a series of bombings aimed at Western tourists and the country’s indigenous Christian communities.

This weekend Cardinal Malcolm Ranjith, Archbishop of Colombo, painted a grim picture of events on the island nation that lies to the south of the Indian subcontinent. “I went to a mass burial of over 60 bodies yesterday at one of the bomb sites. I never want to experience anything like that again in my lifetime – it was devastating beyond words,” said the Cardinal.

According to Missio Sri Lanka, which is a Pontifical Mission Society, the death toll stands at 253 people, including 38 foreign nationals and 45 children. Missio’s director Fr Basil Fernando added: “The total number of injured stands at this moment as approximately 500, among whom there are critically wounded and disabled patients.”

According to Cardinal Ranjith: “Many who miraculously escaped death do not know and have not been told that some of their family members have lost their lives. Those who are able to talk want to know what happened to the family members who accompanied them to church. Some are certainly dead and gone, but how to tell them this news?”

In Dublin’s pro-Cathedral, members of Ireland’s Sri Lankan community gathered to say prayers at a Mass of Remembrance, and Archbishop Diarmuid Martin welcomed all those present to express their solidarity with the victims, no matter their own personal faith.

“We come filled with a deep sense of sympathy and solidarity for your people and your nation,” Archbishop Diarmuid Martin told the members of the Sri Lankan community. “We express our closeness, especially to those of you who have lost family members or friends.

“We were all shocked at the terrible violence that hit the Sri Lankan nation. Naturally, as Catholic Christians we remember in a special way our own Christian brothers and sisters who were among the prime targets and victims of the violence. May God grant them eternal rest and peace.”

Among those present in the congregation were Uachtarán na hÉireann Michael D Higgins and the honorary Consul General to Ireland, Darina Allen.

“I am therefore very grateful to all the members of the Sri Lankan community in Ireland who have joined us as we celebrate our Mass, saddened of course that in your country on this Sunday, Mass will not be publicly celebrated.

“Let us pray now, each of us in the traditions of our own faith, for peace in Ireland and for peace in a country, distant geographically, but with which in our hearts and in our history we have so much in common.”

Later in his homily, Archbishop Martin said that the people of Sri Lanka and Ireland have both known the horror of violence and have experienced the joy of an emerging peace. He said that terrorist violence in Ireland and in Sri Lanka was the result of “groups who take it upon themselves to decide the narrow type of society they feel is the right one, and to impose it on all”.

“Men and women of violence betray the deep desire of humanity the world over for a future of peace,” he said.

Concluding his homily, the Archbishop said: “Today our Ireland is more pluralist. This means that our nation must be one that welcomes the people, young and old, from different cultures and faiths, who make Ireland their home and enrich our culture and our future.  I hope that this has been the experience of the Sri Lankan Irish and I thank you for your thoughtfulness in accepting to take part in this simple gesture of solidarity with you and with your nation at this moment of tragedy.

“May the God of peace touch all our hearts and bring us closer to each other in the knowledge that peace, and not violence, constitutes the only sustainable future for our world and especially for our younger generation.

“Peace constitutes the only sustainable path to the future, not as a pragmatic judgement, but because peace expresses something fundamental about what being a true human family means,” Archbishop Martin said.