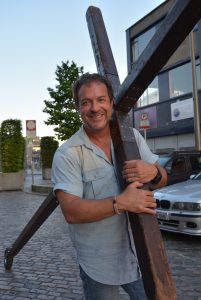 An American father of five who has carried a 12-foot wooden cross through 176 countries on all seven continents, facing down firing squads, venomous jungle snakes, and members of al-Qaeda got a rather unusual welcome in Ireland last week.

Keith Wheeler has been travelling around the world with his cross for over thirty years as a pilgrim of peace with a message of reconciliation and love.

“I am not here promoting another religion, organisation or charity – I am promoting a message of love on the roadsides,” he told CatholicIreland.net.

In 1985, as Keith was praying one night, he felt that God spoke to his heart, “I want you to make a cross and begin carrying it through the streets on Good Friday.”

He also felt these words burning in his heart, “Anyone can carry a cross – think about Simon of Cyrene; he carried Jesus’ cross. Anyone can die on a cross – think about the two thieves on either side of Jesus. Only One, however, could die for the sins of the world … and that was because of love. I want you to take the cross and identify that message of love along the roadsides of this world.”

Later, Keith felt God saying to him, “For you, the cross is never to be a symbol of protest, but a symbol of reconciliation; I want you to be a ‘pilgrim of peace’ and a messenger of My love.”

Three years ago he carried his weighty cross to the top of Mount Kilimanjaro with his wife, Nicole, a schoolteacher and marathon runner.

His pilgrimage has taken him to places like Iraq, Iran, Tibet and China, as well as nations at war, including Bosnia and Rwanda during the genocide. He has even brought his cross to Antarctica.

He has been arrested over 40 times by authorities unnerved by his pilgrimage, and in the US state of Louisiana he was beaten and left for dead.

To his list of incredible experiences in remote and dangerous spots around the world he can now add an Irish tale of welcome, which saw the patrons of three packed Dublin city centre pubs come out to greet him and, in one case, insist that he bring his cross inside.

The 57-year-old, who bears a resemblance to Bruce Springsteen, told CatholicIreland.net that though he doesn’t drink, he was bought six pints of Guinness. 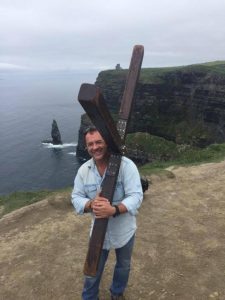 A number of Irish wags chided him for “cheating” because his cross has a small wheel and “Jesus didn’t have a wheel!”

He spent time with the “heaps of homeless people” he came across in the capital and he also brought his cross to Glendalough and the Cliffs of Moher, where tourists from places like India, France, Switzerland and Nigeria thronged to talk to him.

Praising Ireland for being open and welcoming to the stranger, he said that “There is a right way and a wrong way to do it and Ireland seems to have done a very good job so far.

“I know it is an issue in our world – how we handle other nations. But there is also a blessing when we welcome nations. I was a stranger and Ireland welcomed me. They welcomed the cross.”

Speaking in the wake of the atrocity in Manchester, he said the challenge today was to build bridges and dialogue.

“Jesus said blessed are the peacemakers – not the peace-lovers or the peace-wanters – but the peacemakers. That means we go into a world of conflict and we go to both sides. How can we make peace if we only go to our side – the people who look and act like us?”