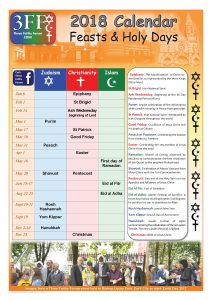 The Lord Mayor of Cork Cllr Tony Fitzgerald will launch a new interfaith calendar at City Hall on Wednesday at a ceremony attended by representatives of the city’s Christians, Jews and Muslims.

The calendar is the first of its kind produced by Cork’s Three Faiths Forum, which was established just two years ago.

Speaking to CatholicIreland.net, Gerry Forde, a member of the Three Faiths Forum, who is also Justice Officer with the Society of African Missions said, “We hope to share the calendar in schools and faith communities around Cork.”

Although schools are being invited to download the free calendar for their students, this novel venture is aimed at everyone, including churches and institutions, according to Gerry Forde.

“It is intended to create an awareness that we are a multi-cultural multi-religious society now and to give people a little bit of understanding, awareness and acceptance of that diversity.

“It is a simple calendar with a one-line explanation of the particular feasts in the different religions. Our aim is to increase people’s acceptance that there are different faiths present in Ireland today and help them understand that we can all live with and get on with each other.”

Of Lord Mayor Cllr Fitzgerald’s hosting of the official launch on Wednesday, Gerry Forde told CatholicIreland.net that it was “a recognition that Cork is a very diverse place and there is a need to cater for diversity and a need for co-operation between different diverse groups in society.

“There has been a massive change in Ireland over the last 20 years, especially the growth in the Muslim population – there are now about 70,000 Muslims in Ireland.”

The Three Faiths Forum is an initiative of a number of individuals from the three Abrahamic faiths in Cork. “We all trace our roots back to Abraham and that makes it easy for people to sit down together.”

According to Gerry Forde, these include three members of the Church of Ireland, a Catholic priest, the OLA provincial Sr Kathleen McGarvey, a member of the Jewish community, individuals like Forde himself, Methodist Charles Pyne and Sheikh Ihab Ahmad, the Imam of the mosque in Blarney Street and other Muslims from the mosque in Tochar.

“It has been growing slowly. It is only now that we are at the stage that we know each other well enough to do something together and this is one initiative.”

Three Faiths Forum, also known as 3FF, was set up in the UK over 20 years ago. It works to build good relations between people of different faiths, beliefs and identities.

According to the www.3ff.org.uk website, it creates spaces in “schools, universities, and the wider community where people can engage with questions of belief and identity and meet people different from themselves”. This enables people “from different backgrounds – both religious and non-religious – to learn from each other and work together”.

The new interfaith calendar will be available on Cork Three Faiths Forum’s Facebook page from Wednesday and websites such as the Society of African Missions as a downloadable resource. https://www.facebook.com/Cork-Three-Faiths-Forum-1896238627255020 Or email: [email protected]