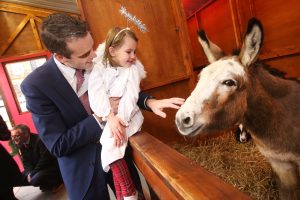 A gift from the country to the city, the Live Animal Crib, has been opened in Dublin alongside a new Christmas Winter Wonderland.

“The Crib reminds us of the simplicity of the Christmas message and represents a small piece of the countryside in the heart of Dublin’s vibrant bustling streets,” said Brendan Carr, Lord Mayor of Dublin at the opening at the Mansion House, Dublin on Tuesday 6 December 2016.

He thanked the Irish Farmers’ Association (IFA) for the gift of the animals and their care throughout their stay at the Live Animal Crib.

He encouraged all Dubliners to visit the Crib in its new Christmas Winter Wonderland setting on Dawson Street, which he hopes will revitalise the 20-year-old tradition. 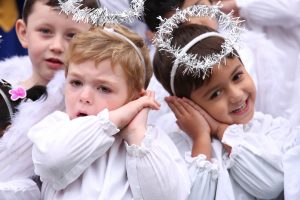 Alfie Windum and Aitan Bass from St Joseph’s Maryland belt out the Christmas carols at the opening. Picture: Finbarr O’Rourke.

The Crib and Winter Wonderland are free to all, and donations go to Dublin’s oldest charity, the Mansion House Fuel Fund. Organisations which have benefitted from this fund in recent years include: St Vincent de Paul, Dublin Simon and Abbey Presbyterian Church Hamper Fund.

The IFA President, Joe Healy, stated that he hopes there will be many visitors to support the charities and said: “As a representation of farming life in this country, the Crib brings joy and excitement to young and old, but it is very special for young families. This traditional nativity scene which farmers have gifted to the people of Dublin is a symbol of our largest indigenous industry.”

This is his first year to attend the official opening and he highlighted how city children can enjoy visiting and patting the live animals and experiencing for the first time something like touching a sheep’s woolly coat.

The animals are brought each morning and returned to an Enniskerry farm each evening. The farmer, who has provided animals for 20 years, said he loves seeing the joy on visitors’ faces when they encounter animals such as the donkey and goat, which are constantly interacting with each other.

This year Lord Mayor Brendan Carr has introduced a Winter Wonderland for children to walk through on their way to the Crib. They can interact with Santa’s sleigh, his reindeer, giant presents and baubles, and enjoy Christmas on Dawson Street.