Home > Featured > Laudato Si captures cry of the poor and cry of the earth: Robinson 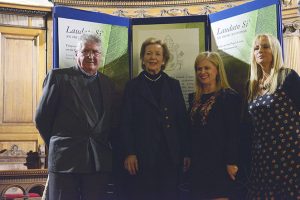 Former president of Ireland, Mary Robinson, has paid tribute to Pope Francis’ encyclical on the environment, Laudato Si, saying it captures both the cry of the poor and the cry of the earth.

Speaking at the launch in Trinity College Dublin last Friday of Laudato Si’: An Irish Response, a new collection of essays by eleven commentators and academics who reflect on the papal encyclical, she highlighted how the Pope tells us “that the human environment and the natural environment deteriorate together, we cannot adequately combat environmental degradation unless we attend  to the causes related to human and social degradation.”

In their chapter in the new book, Sr Brigid Reynolds and Fr Seán Healy focus on justice and ecology. Mrs Robinson noted that the two believe that basic income for everyone would lessen inequality. “Both of these people have done Trojan work in the area of poverty and social justice for decades,” she said.

The first is with Rerum Novarum (1893) which criticised the exploitation of workers in factories. The second is Pacem in Terris (1963). When the world was teetering on the brink of war, this encyclical not only rejected war but provided a path towards lasting peace. The third is Populorum Progressi in which Pope Paul VI created a framework for evaluating what kind of development could be called human development.

“Laudato Si takes on an even wider perspective, this time to embrace not just workers and the poor but all creation itself,” the former head of state said in her address.

The encyclical does deal with concrete social and ecological issues, she said and referred to Pope Francis’ claims that the impact will be felt by developing countries in the coming decades. She cited the recent hurricanes which hit the Caribbean, the US and Ireland as a testimony to this.

“Unfortunately, Ireland is finding it very difficult to lower greenhouse gas emissions in the area of transport and agriculture. We are discussing and discussing when what is needed is action,” Mrs Robinson warned.

Noting that protection of biodiversity has hardly ever appeared in papal teaching, she said it is central to Laudato Si.

“Many scientists believe that we are living through the sixth extinction of life, since life itself began in the oceans 3.3 billion years ago. Pope Francis is explicit in his understanding of biodiversity destruction – the earth’s resources are being plundered because of short-sighted approaches to economy, commerce and production.”

Referring to Dublin priest, Dr Dermot Lane’s chapter on ‘Anthropology and Theological Reflections in Laudato Si’ she said it emphasises the importance of science in developing ecological theology.

“Our gaze must include the totality of the cosmos and not be bogged down by focusing exclusively on just the human journey. Pope Francis rejects anthropocentrism which means putting humans at the centre of the universe, making the human the measure of all things, and therefore subordinating everything to serve the needs of humans.”

The book was launched as a new US study concluded that global warming is being driven by human activity such as the burning of fossil fuels. 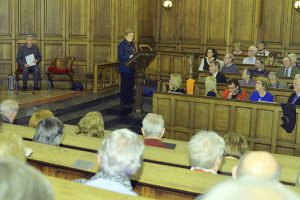 Mary Robinson addressing the launch of ‘Laudato Si’: An Irish Response’ in the chapel at TCD. Pic: Courtesy Irish Columbans

The new US research on climate science contradicts the line adopted by the Trump administration, which has championed fossil fuel industries such as coal and oil as well as a withdrawal from the Paris Climate Agreement.

According to the US report, which was coordinated by the US Global Change Research Program, sea levels are expected to rise between one and four feet by the end of the century and could swell by up to eight feet if emissions of greenhouse gases continue to rise.

Mrs Robinson, whose foundation campaigns on climate justice, was one of a delegation from The Elders who met the Pontiff on Monday.

She presented a copy of the new Irish book to Pope Francis at that meeting at Santa Marta.

The Elders is a group of global leaders who work together for peace and human rights. They include former UN Secretary Generals, Ban Ki-moon and Kofi Annan.

The book launch in TCD occurred as the Citizens’ Assembly discussed climate change at the weekend.

Dr Dermot Lane, who wrote one of the book’s essays told CatholicIreland.net that he recently made a response to the Citizens’ Assembly on the national mitigation plan.

“The Government have totally neglected their responsibilities to measure up to the UN commitments and they will not meet the targets by 2020. What kind of example is that for this Government to give to the younger generation? They blithely state that by 2050 Ireland will have met its obligations but they won’t be around to be answerable on whether they do.”

In her address at the Chapel in TCD, Mary Robinson said she was happy to have participated with Sean McDonagh and others in a Symposium on Laudato Si in the Vatican on 3 July 2015.

She said that although she joined in many of the positive points made in the essays, she also had a criticism.

“Through the work of my Foundation and our partners around the world, we have evidence of how women are disproportionately affected by climate change, due to the fact that they are already discriminated against in society and have unequal access to their rights. As farmers, women are most affected when their crops are washed away in a flood or due to sea level rise. As young girls and teenagers they suffer when collecting water for the family becomes more difficult due to drought. And as mothers they suffer from the increased incidence of disease associated with a warming climate.”

“Women around the world are already adapting to a changing climate, if necessary migrating to find new livelihoods and opportunities for their families, and leading the transition to renewable energy. Respecting and empowering women to realise their rights is part of respecting nature itself. I think it is a pity that Pope Francis didn’t emphasise more the importance of the empowerment of girls and women to his vision of the world.”

Speaking to CatholicIreland.net, Dr Dermot Lane, the retired head of Mater Dei Institute of Education in Dublin said that Donald Trump, by refusing to honour the US commitments to the UN Paris agreement, had unwittingly raised people’s consciousness of the importance of the issue.

“So there is a backlash now in America from the mayors of the major cities such as New York and California who are rowing in, in spite of their president’s ill-informed and ignorant stance on climate change.”

Eco theologian, Fr Sean McDonagh called on the Church to host a synod on the environment which would enable people grapple with the issues and challenges in the same way as the synod on the family had.

“That would be a great way for the Church to give a place to people to educate themselves about what is happening,” he said.