ISIS persecution of Christians is genocide 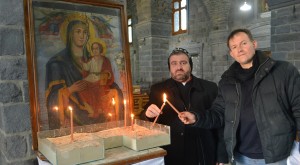 A spokesman for Aid to the Church in Need has appealed to the Irish government to recognise the genocide that is unfolding against Christians in the Middle East before it is too late.

John Pontifex made the call ahead of his address in Dublin on Thursday evening entitled ‘Genocide: How Christians are being killed and driven out of the Middle East for their faith’.

The talk was chaired by the former Fianna Fáil TD, Dr Martin Mansergh.

Speaking to CatholicIreland.net, Mr Pontifex referred to the 1916 Proclamation and its specific reference to religious freedom.

“It is absolutely vital that we stand up for those who are persecuted and those who are faced with genocide. It is quite timely that there should be the link between events in 1916 which we are remembering and events today in 2016 in Syria and Iraq.”

Speaking about his recent fact-finding visit to Syria, where he visited the destroyed city of Homs, Maaloula and Damascus, John Pontifex said the criteria for genocide under the UN Convention on Genocide had been met in Syria and Iraq against Christians and other faith groups.

He appealed to Irish politicians to follow the US House of Representatives and European Parliament by recognising the genocide before it is too late.

“We do not want to wait to see the complete elimination of Christians, Yazidis and certain Muslim groups before we actually declare this violence for what it is because by that stage it will be too late,” he warned.

He said speaking up now could prevent further genocide and better facilitate the punishing of those responsible.

In Syria, he saw churches that had been desecrated by Islamic State as well as people driven from their homes because they would not convert or pay the ‘jizya’ tax.

The persecution includes assassinations of church leaders, mass murders and deportations, torture, kidnapping for ransom, forcible conversions to Islam. The sexual enslavement and systematic rape of girls and women has also been widely documented.

“We heard stories of people being threatened with being killed if they refused to recant their faith and we did see evidence of people who were forced out of their communities and told that if they didn’t convert they had no option but to leave. We also have evidence of bishops, priests and other faith leaders being specifically targeted, kidnapped or killed.” 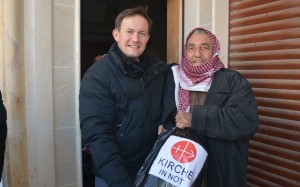 ISIS’s own public statements have expressed its intent to wholly eradicate Christian and other minority communities from its ‘Islamic State.’

He said the UN Convention on Genocide defines genocide in terms of a very definite attempt to eliminate a particular religious or ethnic group from their homeland.

“If you look at the work of ISIS in Iraq and Syria and also in places like Libya too, you can see that the objective is very clear – to eliminate by whatever means or recourse is required, particular faith groups. It is not just Christians – if you look at the situation on the ground in Iraq and Syria – it is the Yzisidis and also specific Muslim groups who do not share the ISIS vision of Islam who also have had it in the neck.”

“They have been forced out of their homes, some of them have been killed, their churches and other places of worship have been desecrated and in some cases repeatedly, people have been in some instances given a choice to either convert or leave.”

Aid to the Church in Need is providing assistance to people affected by the conflict in Syria.

According to Mr Pontifex the main finding of his visit was that Christians and other minorities “don’t want to leave in many cases” but want support to help them stay in the locality so that when the conflict ends they have a better chance of being able to return to their homelands.

The people we met seemed to be so delighted to see us. They often feel forgotten. It is greatly depressing for them that they are going through this experience of total devastation and it would seem sometimes that nobody cares.”

“By reaching out to them and going to visit them and allowing them to tell us their stories, as well as being greatly cathartic, it is also empowering because it enables us as a catholic community to unite with them heart to heart and to offer them not just our prayers, which are vital, but also to offer them the practical support which is in many cases the difference between life and death.”

“Our position as a charity is that we want to save Christianity in the Middle East by saving one family at a time. To save the community we have to help them by physical practical means.”