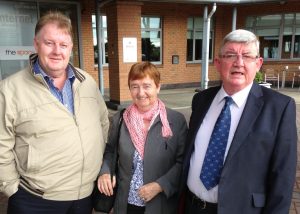 An Irish missionary nun has been named among this year’s recipients of the Presidential Distinguished Service Awards for her role in coordinating a response to the Ebola epidemic in Sierra Leone.

On Sunday, Sr Mary Sweeney, a Sister of St Joseph of Cluny and a native of Dungloe in Co Donegal, was named along with veteran broadcaster Terry Wogan, who will receive a posthumous award in recognition of his contribution as a broadcaster to Ireland and the Irish community abroad.

Other recipients include Martin Von Hildebrand for his work promoting economic, social and environmental rights in the Colombian Amazon and Nora Higgins for her work with the elderly Irish in London.

The awards will be presented in December.

For over fourty-four years, Sr Mary Sweeney has worked “tirelessly” and often with limited support, in the extremely challenging environment that is Sierra Leone.

Through her efforts at the St Joseph’s School for the Hearing Impaired in Makeni, she has given education, skills training and life opportunities to the most vulnerable of people; children with a disability in a developing country.

St Joseph’s School for the Hearing Impaired, Makeni was established in 1979 by the Sisters of St Joseph of Cluny.

The school has become a pioneer of special education across Sierra Leone and now welcomes more than 251 students from across the West African country.

St Joseph’s School for the hearing impaired children is the only school in West Africa offering primary education and language acquisition according to the so-called Maternal Reflective Method (MRM) supported with sign language.

This allows children to learn to speak, write and read in any language, makes them more capable of functioning in society, taking up official jobs or preparing them for further studies in secondary education or in University.

The school’s primary objective is to provide an education for the students to then occupy their rightful places in their local society, both in the economic and cultural fields.

Sr Mary remained in Makeni to keep the school open during the brutal civil war in the 1990s, and more recently she has played a significant role in coordinating much-needed support for the Ebola response in Makeni.

In recent years, she has focused her energies on promoting the development of a curriculum for the training of teachers for special needs education in Sierra Leone.

Responding to the news, Sr Rowena Galvin, provincial of the Sisters of St Joseph of Cluny in Ireland, told CatholicIreland.net that the order was “very proud of Sr Mary and delighted that her hard work has been acknowledged”.

“It is also an acknowledgement of the work that the Cluny Sisters have done and continue to do not only in Africa but India, Haiti and other parts of the world,” she added.

A Guardian article published for Christmas 2014, reported that though Christmas gatherings were cancelled in Sierra Leone due to the Ebola crisis, 900 children in one town were brought some cheer thanks to Sr Mary Sweeney.

The special needs teacher distributed presents to children whose families were hit by Ebola in Makeni, a busy commercial hub three hours north of Freetown, after private donations of 1,000 shoeboxes with presents arrived from schools in the UK.

“We started to distribute the presents because we wanted them to have something. We couldn’t bring them altogether because of the ban on gatherings this Christmas,” she related.

The boxes contained things like socks, shoes, sunglasses, notebooks, markers, football jerseys. In one of them a child had even put in a few pound coins.

“Some of these children have been traumatised. It is so fantastic to give them something to show them somebody is looking out for them,” Sr Mary said.

The boxes arrived at St Joseph’s school for the hearing impaired in early December after supporters in the UK decided to take action in the absence of an international response to Ebola in Makeni.