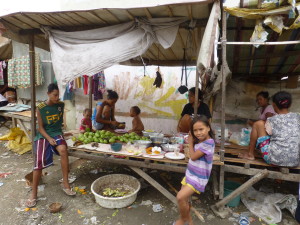 We could come back to our comfortable lives.

That was the overriding thought in my mind as we stood in the baking heat in Manila and watched children naked and crawling with lice and sores run about the cemetery when they live.

Yes, the cemetery where they live. Takes a while to sink in doesn’t it.

During the run up to our ‘World Missions Ireland’ trip to the Philippines and South Korea I knew we had to go there. I just couldn’t get my head around the idea of people living in a cemetery.

The reality of finally seeing it was shocking. Almost 2,000 people are born, love and die amongst the grey tombs. They have nowhere else to go. They scratch out a living looking after the tombs and are particularly busy during November, the month of the Holy Souls.

Just one public toilet caters for all these living souls, they have no running water; they have no electricity bar those who ‘jump’ it illegally putting themselves in mortal danger of electrocution.

They are not on any tourist guide; they are invisible to most people, most of them don’t even have a birth certificate; It is a shocking indictment of their society to think that they are only acceptable to the dead.

They have some hope, however, and that hope takes the form of two Korean Columban Sisters, Sr Julie and Sr Bella. The two missionary sisters began helping them and working with them in 2011.

Sr Julie says, “When I first saw them they were like animals; eating and drinking from the ground, it was shocking and sad. We have done a lot of work with them; we have feeding programmes, we have taught them about hygiene and personal health.”

“We have taught them about respect for others and themselves but it is an uphill battle. Their lives are a constant daily struggle. I say to them what colour is your God and they say yellow, the colour of hope”.

God knows they need it.

Offering hope and hope and dignity to the most cast aside and marginalised is at the core of what missionary priests and sisters give to people.

We saw plenty of examples of their sterling work both in the Philippines and South Korea during our mission visit.

We saw it in the eyes of the children rescued from paedophiles and other abusers by Fr Shay Cullen in Olangapo.

His 40-odd years in the Philippines have not dimmed his fervour for the rights of children to a happy, innocent and risk free childhood. 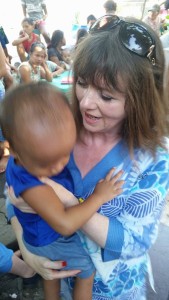 We wondered what would have happened to the Badjao people, sea gypsies whose very name means ‘of no value’ were it not for the passion of Presentation Sister Evelyn Flanagan, a vocal and tireless defender of their rights.

Limerick Columban Noel O’Neill would put any businesses magnate to shame such is his success in building factories which employ people with intellectual disabilities, all of whom now have the dignity of work and have the distinction of numbering Incheon Airport in Korea as one of their clients.

Staying in Korea we had the privilege of standing with the people of Ceju who are opposing the construction of a massive naval base.

We only stood with them for one day but Pat Cunningham from Westmeath is there day after day.

He passionately believes in their right to protest and as peace and justice coordinator for the Columbans in Korea he walks the walk.

He is at the peace camp where he stares down the police and tries his best to stop the juggernaughts intent on constructing this blight on the landscape.

Of course if it was just blight on the landscape that would be bad enough but we all know the far more serious consequences of a massive naval base in Korea.

Fr Moon, a local Jesuit, who also maintains a presence at the peace camp told me, “We are in agony here with this development but the Columbans reached out to us and are standing with us, like the Good Samaritan”.

Back in Seoul, Frs Donal O’Keefe, Sean Conneely and Liam O’Keefe are just some who concelebrate the weekly open air mass for the people drowned in the ferry disaster last year.

The families of the deceased are still waiting for justice.

Sr Nora Wiseman from Cork is larger than life and has created a lovely old people’s home in Chuncheon where the residents are cherished, loved and valued.

One of the most touching and surreal moments there was listening to one of the residents, a tiny little Korean lady of about 90 singing ‘Danny Boy’!

Cherished loved and valued too are the people living with Aids in Seoul in a welcoming haven provided by Miriam Cousins.

Rejected and ostracised by their families Miriam has brought them into the wider ‘missionary family’ who take care of them and treat them as people not as objects of derision.

This is but a very short overview of our World Missions Ireland mission trip and just a tiny glimpse into the worlds and work of our missionaries abroad.

For me, one of the Columbans in Seoul, Denis Monaghan, summed it up better than I ever could .. “Missionary work is like shovelling light into a dark hole.”

Sally McEllistrim is the PR Manager with World Missions Ireland, the official Mission Charity of the Catholic Church in Ireland. It supports missionaries and mission projects in up to 80 mission countries abroad, both spiritually and financially.