Ireland’s social contract is broken and Government is not working in the interest of all.

This is according to Social Justice Ireland (SJI), which launched a report with its own ideas on a social contract for this new century.

“2017 is the first year of a new century for Ireland and now is the perfect opportunity to develop a new and radical social contract for Ireland’s second century,” said Dr Seán Healy, Director, SJI.

“Ireland’s social contract is broken. The legitimate expectations of citizens are not being met. This is most obvious in areas such as housing and homelessness, a two-tier healthcare system, an ongoing failure to provide rural broadband and high levels of poverty and social exclusion, especially among children,” he said.

He was speaking on the launch of SJI’s annual socio-economic review entitled A New Social Contract for a New Century.

SJI states in this annual review that all democracies are founded on a social contract. With a progressive social contract, government works in the interest of all. Social cohesion and the common good are the measures of progress, and the economy is nurtured for the benefit of society.

In its review SJI indictes some policies to ensure this. These strategies are under five headings: vibrant economy; decent services and infrastructure which are accessible to all; fair taxation system to support vital infrastructure; good governance with everyone having a say; and development across the regions.

The review states that infrastructure deficits are to be seen in the housing and homelessness crisis, and that the government’s plan to tackle this problem is “far too limited” to address the scale of the problem. Another example of a deficit is the lack of rural broadband, which means that those living in remote areas are disadvantaged.

“The key questions are: what standard of living do people want and expect, and what infrastructure, services and resources are required to deliver this?” said Michelle Murphy, Research and Policy Analyst, SJI.

This requires dialogue and input from all sectors of society, and choices that deliver the agreed social contract.

SJI’s review lists what might be included in a social contract in a modern democratic society as follows:
• access to meaningful work;
• protection from poverty when paid employment is not accessible;
• a minimum income floor in old age, disability or infirmity;
• an education system that is relevant, accessible and high in quality;
• a guarantee that needs will be met at times of ill-health;
• the regulation and protection of the environment for the good of all citizens; and
• participation in civic life and in shaping the decisions that affect citizens.

“It [a social contract] means that everyone contributes to the common good – economically, socially or culturally – on the assumption that the State will provide a minimum standard of living, essential social services and infrastructure and the protection of basic rights,” said Michelle Murphy. 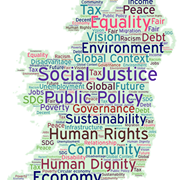 The review states that there is widespread disillusionment and disappointment that institutions set up to serve society have failed to deliver and are now “part of the problem rather than part of the solution”. The perception is that society is organised to serve corporations and shareholders, who are answerable to no one. This is also people’s perception of the EU.

“Social Justice Ireland believes that at the heart of this new social contract is a belief that benefits derived from things like technological development, economic growth, and societal advancement are shared. A real republic will stand for social justice and for equality. Social Justice Ireland calls on leadership from all sectors of Irish society to become part of a debate on a new social contract for a new century,” said Dr Seán Healy.

SJI states that such a contract would cost money, and the government needs to decide if such costs are met by increasing taxation, by imposing charges, or increasing efficiency. A broadening of the tax base might also be required.