Home > Featured > Global persecution of Christians at all time high 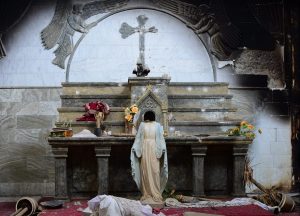 Decapitated statute of Our Lady in Mar Addai-Church Syria

Seventy five percent of all religiously motivated attacks and oppression are against Christians according to a new report.  Aid to the Church in Need’s: Persecuted and Forgotten?A report on Christians oppressed for their Faith 2015-17 , also shows that persecution against Christians in the worst-affected regions has reached an all time high.

Targeting of religious belief – driven by hatred of Christians and the faith itself, emerges as a common denominator in hundreds of testimonies of persecution received by Aid to the Church in Need (ACN) from countries around the world. As a Catholic charity in 140 countries, ACN records and assesses persecution against Christians around the world.

The report states that every single day Christians suffer persecution for their faith – many of them are left with no choice but to flee for their lives. In the foreword to the report Archbishop Issam John Darwish, Melkite Greek Catholic Archbishop of Zahle and Furzol, Lebanon, states the in Bequa the Church has welcomed 800 families, more than 6000 people, who have either fled the war in Syria or have been driven out of their homes by Islamists who targeted Christians more as the war went on.

Quoting the gospel phrase: “as you did it to one of the least of these my brethren you did it to me,” (Matt25:40) the Archbishop said, “When the Christian families who have turned to us need the very basics for daily life – food, shelter, and medical care – how can we refuse to help? Until now, the UN and other humanitarian organisations have provided no aid and so we have opened our homes and hearts to them.”

He said that many of the refugees have spoken of persecution. Like the man whose brother, a priest, was kidnapped. He paid the ransom but they killed the priest and sent a box containing a severed limb tattooed with a cross to show he was dead.

Drawing on fact-finding trips, first-hand testimonies and facts and figures from little-known corners of the world, the 2017 report contains all too real stories of persecution. There is no precise number for Christians persecuted for their faith, but reports show that while there was a fall in the number of deaths during the period covered in the report to below 100,000, violence against Christians remained severe. In its summary, the report highlights that in almost all the countries reviewed, oppression and violence against Christians have increased since 2015. This is significant given the rate of decline in the immediate run-up to the reporting period. The one exception is Saudi Arabia, where the situation was already so difficult that it could not deteriorate any more.

In Iraq, the exodus of Christians threatens the very existence of one of the world’s oldest churches. It will disappear within three years unless there is major improvement. This situation is similar in parts of Syria including Aleppo, which previously had one of the largest Christian communities in the Middle East. In Iraq’s Nineveh Plains, 12,970 homes were damaged or destroyed in Christian majority towns and villages during a two and a half year occupation by Daesh (ISIS). 120,000 people were displaced. Daesh (ISIS) and other Islamist militant groups have committed genocide in Syria and Iraq. If Christian organisations and other institutions had not stepped in, the Christian presence could already have disappeared in Iraq and other parts of the Middle East, according to the report.

It also offers a glimmer of hope stating the defeat of Daesh and other Islamists in major strongholds of the Middle East, may help recovery for Christian groups threatened with extinction. Many would not survive another similar violent attack. In Iran, celebrating Mass in the main language of Farsi is not allowed. Priests have to ask a Muslim attending a service to leave or they face possible arrest for alleged proselytism – seeking converts. 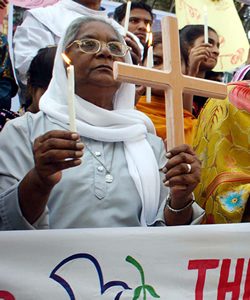 Boko Haram (linked to Daesh) has carried out genocide against Christians in northern Nigeria. In the Maiduguri Diocese, Boko Haram mass killing and other violence caused 1.8 million to be displaced and  left 5,000 widows  and 15,000 orphans. In Egypt, it is illegal to convert from Islam to Christianity.

Christians have suffered increased violence and oppression because of increasing religious nationalism. In India, for example, persecution has risen sharply since the right-wing Hindu nationalist Bharatiya Janata Party (BJP) has taken power led by Prime Minister Narendra Modi in 2014.

In China the President has described Christianity as “a foreign infiltration”. Increased hostility to Church communities accused of resisting government control has meant that far more crosses have been removed from churches and church buildings destroyed.  More than 2,000 churches and crosses were demolished within 12 months up to and including April 2016. Some regional authorities have also banned Christmas trees and greetings cards. In worst-offending North Korea, “unspeakable atrocities” against Christians include enforced starvation, abortion and reports of faithful being hung on crosses over a fire and others being crushed under a steamroller.