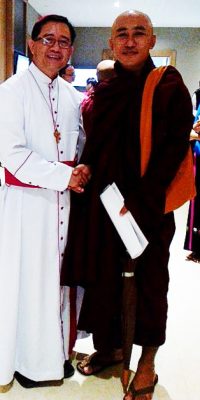 According to Aid to the Church in Need (ACN), a leading bishop has said that fanatics have taken control of the economy of Burma (Myanmar) by fostering religious conflict to deter outside investors. Speaking to ACN, Bishop John Saw Yaw Han, General Secretary of the Catholic Bishops’ Conference of Burma, explained how religion was used as a tool to further economic interests: “The rising cases of religious fanaticism and negative indoctrination are disturbing the country. Sometimes religion is being used for social dominance, protection of economic and political interests by a small group of individuals.

“For them conflict and violence are necessary in order to destabilise, to deter outside investors. With little competition, only these individuals control the economy, which leads to a lack of development and poverty.”

Bishop Yaw Han was speaking after the religious leaders of Burma released a document called “Seize the opportunity!” encouraging faith actors to act as a conciliatory influence on a country long beset by religious conflict. He said: “Religion is a sensitive issue in Myanmar. In Myanmar, politically motivated religious violence has very ancient roots and has far-reaching consequences. Religious intolerance is often manifested in hostile acts in the country by denouncing or ridiculing religious values of a particular religion. The country has already experienced extreme violence about religious issues resulting in many deaths and homelessness.”

As Burma evolves towards democracy, Bishop Yaw Han urged religious leaders to be brave in speaking in favour of peace and justice, something they sometimes avoid doing. He said that, for many decades, some religious leader have “sided with the powerful and ignored the oppressed”. He said that the religious leaders need a “prophetic voice and moral courage in fighting against injustice, in building up peace”.

He also mentioned that the upcoming election on 8 November is “very important because it is still choosing between the old system – which is exclusive culture, before 2015 – and federalism – inclusive culture. Now Myanmar’s transition to democracy is ongoing, ushering a series of violent conflicts and homelessness, and Myanmar is on the cusp of major reforms.”

However, despite these challenges, Bishop Yaw Han was confident that Myanmar could enter a new period of religious tolerance and peace: “With sensible leadership and articulation of a democratically smart vision allowing diversity of religion, culture, ethnic identity, along with re-education and re-orientation at every level, Myanmar could become a beacon of religious and ethnic inclusion.”

ACN’s support for Burma has included the construction of churches, the training of priests and Christian education and formation.