Focolare gathering to focus on mercy in politics & climate justice 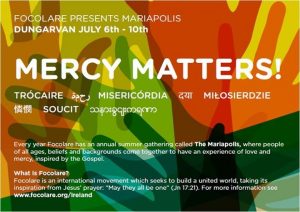 Former Northern Ireland police Ombudsman, Baroness Nuala O’Loan, and an authority on climate change, Dr Lorna Gold will be among the speakers at Focolare’s annual summer gathering which takes place from 6-10 July 2016 in Dungarvan.

Over 250 people, including a strong contingent from Northern Ireland, will come together for the gathering which has the theme: ‘Mercy Matters’.

Co-director of Focolare, Catherine Burke says that in the present climate of mistrust, Focolare’s spirituality, based on dialogue and unity has a vital role to play in forging “bonds of understanding and humanity between people and communities, especially where there is conflict between them”.

This year’s gathering, with its hub at the Gold Coast Hotel Complex and the Fusion Hall in Dungarvan will focus in particular on bringing the ethic of mercy into today’s culture.

In an atmosphere of family, young people are looking forward to entering conversations with the keynote speakers, Baroness O’Loan and Dr Gold on the topical issues which are of such relevance to their future, she says.

“We will delve into the topic of mercy as applied to family and Church life, climate justice and politics, especially in the context of the Pope’s call to mercy on all these fronts,” said David Hickey, Co-director of Focolare in Ireland.

“Then we will try to apply the resulting conclusions to our daily life at home and in society generally.”

Dr Lorna Gold is Head of Policy and Advocacy with Trócaire.

The author of New Financial Horizons: the emergence of an economy of communion, the Sharing economy and co author of Ethical Globalisation, was moderator during a two-day conference in the Vatican last year on People and Planet First: the Imperative to Change Course.

Baroness Nuala O’Loan, a noted public figure in Northern Ireland, served as Police Ombudsman from 1999 to 2007.

In April, she addressed the Faith in the Future: Religion in Ireland in the 21st century conference in Boston. It is the first time that Baroness O’Loan speaks at a Focolare organised event.

“It is a retreat with a difference, an unforgettable holiday and a thought provoking forum, but most of all it is a moment of family with people of all ages and backgrounds making connections and discovering that it is possible to live as brothers and sisters no matter how different we are.”

Bishop Alphonsus Cullinan of Waterford & Lismore and Bishop Brendan Leahy of Limerick will also speak at the event.

The Focolare movement aims include collaborating with others to work towards the fulfilment of Jesus’ prayer ‘Father may they all be one’.

The movement began in the Catholic church but spread to all the Christian denominations and now involves people of all faiths and none.

The movement arrived in Ireland in 1972 and has communities in Dublin, Belfast, Kildare, Cavan, Meath, Dungarvan, Antrim, Limerick and Cork. For further information see www.focolare.org/ireland.