Home > Featured > Bishop of Elphin critical of beliefs around Limbo

Bishop of Elphin critical of beliefs around Limbo 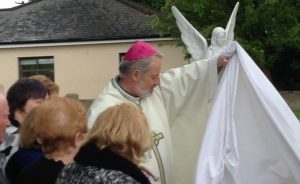 Bishop Kevin Doran of Elphin has criticised the once pervasive belief around Limbo and unbaptised children, saying it didn’t take into account the mercy of God.

He was speaking at a Mass ahead of dedicating a memorial to the children buried in Cloonbonniff Children’s Cemetery near Castlerea on Sunday.

“Looking back on it now, such an idea doesn’t take into account the mercy of God who created these children in his own image and for the purpose of drawing them into relationship with Him,” he said.

The Bishop said that thankfully, the Holy Spirit guided the Church and Limbo was never formally defined as the teaching of the Church.

“In most cases, of course, these children, though not baptised, were born into a community of faith, because their parents were Christian. It is only right that they should be commended to God with a Christian burial.”

He said the Church had always believed that the first to hear the good news of salvation were those who died before the time of Jesus.

This is expressed in the words of the Apostle’s Creed, which tells us that after his death, Jesus descended into Hell. But as the old Catechism explained, “this was not the hell of the damned”.

It was the place where the just waited for the good news. This, in the tradition of the Church, was “where” Jesus was between his death and his Resurrection.

Baptism is important, Dr Doran said, because it is through baptism that we are joined to Christ as members of His body, the Church, and that we are given the Holy Spirit for our mission as Christians.

“So, here today, in Cloonbonniff, we celebrate that hope. We give thanks to God for those children who, though they may only have lived for a very short time, were created in the image of God, and destined to know his love for all eternity.”

“We also remember their parents and their relatives who live around these parts, that they may find peace.”

Elsewhere in his homily, Dr Doran said there was very real connection between the dedication of a memorial to the children buried in Cloonbonniff Children’s Cemetery and the debate which is currently going on about children with life-limiting conditions.

He explained that these are children who, during pregnancy are discovered to have serious medical conditions which, in some cases, mean that they will not live for more than a few hours or a few days.

Others of course grow up as members of their family, go to school, and enjoy a relatively normal life.

“Some commentators, including politicians and doctors, speak of these children as if they were already dead, or as if their lives were worth nothing,” the Bishop of Elphin criticised.

“What a terrible way to talk of sick children who are in need of care. Their ill-health and the distress of their parents are being used on a daily basis to promote a liberalisation of the law on abortion,” he said.

“It is important for all of us who believe in the mercy of God to defend the right to life of these children and support their parents, by working towards the provision of counselling and hospice care for those who need it.”

“In this way, we profess our faith that every child without exception is a child of God, not only entitled to a decent burial, but entitled also to be loved and cared for, especially when life expectancy is short.”