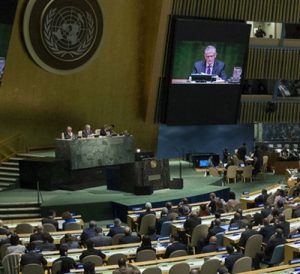 The European response to the refugee crisis has been appalling, Eoghan Rice of Trócaire has said.

“The EU has followed through on just 3 percent of its resettlement commitment. Ireland pledged to resettle 4,000 Syrian refugees but has so far taken in only 311.”

“The Tánaiste referred to her regret at the slowness of this process and her desire to speed up the resettlement process is to be welcomed.”

Mr Rice was speaking following the UN General Assembly earlier this week addressing the issue of migrants and refugees.

“Many people in Europe mock Donald Trump for saying he will build a wall to stop Mexicans reaching America, but Europe has adopted the same approach to Syrians,” he told CatholicIreland.

“We have all seen images of the incredible devastation in places such as Aleppo. It is beyond our understanding how anybody can turn their back on people fleeing from this devastation.”

International law clearly states that all people have a right to seek safety elsewhere when their lives are at risk in their country of origin, he added. “Our response to this crisis cannot be to build walls and borders.”

On 19 March, for the first time, the UN General Assembly hosted a high-level summit to address the large movements of refugees and migrants, with the aim of “bringing countries together behind a more humane and coordinated approach”.

Attended by heads of state and government, ministers, and leaders from the UN System, civil society and the private sector, it was followed on 20th September by a Leaders’ Summit on Refugees hosted by US President Obama where an appeal was made to governments to pledge significant new commitments on refugees.

According to press reports, the summit saw 52 countries and organisations pledge a total of €4 billion in humanitarian aid; double the number of people to be resettled, whether as refugees as or by other legal routes; improve access to education for a million refugee children, and access to work for a million refugees.

However according to Eoghan Rice from Trócaire, the summit delivered “promises rather than firm action” however it was a “welcome opportunity to put political focus on the issue,” he added.

“The outcome of the summit was a non-binding agreement by governments to commit themselves to international law. It was “very light on practical solutions to the global refugee crisis,” he maintains.

The  main positive from the summit, he says, was that governments heard the criticism levelled at them by UN Secretary General Ban Ki Moon and UN High Commissioner for Human Rights Zeid Ra’ad Al Hussein, who were both rightly critical of governments who are content to sit on their hands in the hope that somehow this crisis fixes itself without them playing any role.

“The High Commissioner referred to the ‘banalisation of bigotry’ that we have seen in some parts of Europe,” he said.

Trócaire is supporting Syrian refugees in Lebanon, Greece and Serbia, as well as providing vital aid for people inside Syria, said Mr Rice and he appealed to the public to continue to support their work at trocaire.org/refugee-crisis