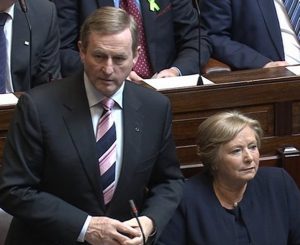 In the wake of a recent UN Human Rights committee report which called for a change in Ireland’s ban on abortion, Taoiseach Enda Kenny has said he will bring a memo to Cabinet on 21 June to set up a Citizens’ Assembly on abortion.

Speaking in the Dáil on Tuesday, Mr Kenny said the first issue to be debated by the citizens’ assembly would be the question of the Eighth Amendment on the right to life of the unborn.

The question of what would replace the Eighth Amendment had to be discussed before any referendum was held, he said adding that if a referendum on the Eighth was held now, “it would not be passed”.

The Taoiseach added that the findings by the UN Human Rights Committee were not binding.

“The UN committee’s verdict in this sensitive and distressing case is non-binding. It is not like the European Court.”

According to Mr Kenny, after the Citizens’ Assembly has made its report, an Oireachtas Committee will examine the issue and finally the Dáil will vote on it. Fine Gael will allow a free vote on the issue.

Reacting to the Taoiseach’s proposal, Senator Ronan Mullen said that putting such an issue before a Citizens’ Assembly was a way of pretending that there was some kind of public demand for changes to Ireland’s abortion laws.

“Oireachtas Éireann should be the only legitimate Citizens’ Assembly,” he told five hundred people gathered for the second annual Ceiliúradh Cois Life, an annual fundraiser for the Pro Life Campaign last night.

“I don’t believe some unaccountable group of people, perhaps not randomly picked and quite possibly subject to pressure from the media, should be proposing our next steps on a life-and-death issue. And we shouldn’t then have to listen to Government claims that what it wants to do has widespread public support.”

Describing the Citizens’ Assembly as a ‘pretence’, Senator Mullen said it was about “pretending that there is a groundswell of public demand for what a small group of people wants to achieve. The only demand for such a change is among small interest groups with influential friends in media and Government. It’s much more of a ‘media-swell’ than a ‘groundswell’.”

Deputy Chairperson Cora Sherlock described it as a “knee-jerk reaction” to the “disgracefully one-sided report last week from the UN Human Rights Committee (UNHRC) which set the rights of the unborn child at zero and ignored the devastating after-effects of abortion for many women.”

She said the Assembly was being set up with one purpose only  and “that is to pave the way for a referendum to strip the unborn child of its last remaining Constitutional protection”.

“Every member of Cabinet knows that the UN Committee that commented on Ireland’s abortion laws last week has a track record in only pushing abortion and has never once taken a stand against the appalling abuses internationally in the abortion industry,” she said.

She cited examples like the “barbaric practice” of refusing to give medical assistance to babies born alive after botched abortions which occurs in England and Canada.

She also disputed that the process announced by the Government would be fair and impartial and said the Government had no mandate from the recent election for setting up a Citizens’ Assembly.

“In the recent General Election, when the issue of abortion came up on doorsteps, it was overwhelmingly pro-life supporters who raised it and not those seeking the removal of the Eighth Amendment.”