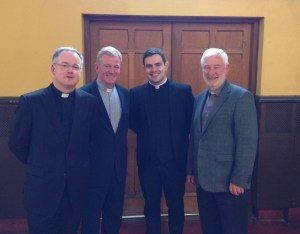 A Co. Kildare man became the country’s youngest priest when he was ordained in his home parish on Sunday last, 25 June 2017.

Twenty-five-year-old David Vard from Athgarvan became the first person from Newbridge to be ordained for the diocese of Kildare and Leighlin in over 20 years.

He was ordained by the Bishop of Kildare and Leighlin Bishop Denis Nulty.

The new priest is son of David Vard Senior and Liz Yelverton. He has two sisters, Rebecca and Charlotte.

David grew up in Limerick, Dublin and for a while Kerry, but said he is proud and honoured to call Newbridge his home since 2000. He is a past pupil of Scoil Mhuire and the Patrician Brothers Secondary School. As a teenager, he played with Newbridge Rugby Club, but a back injury forced him to stop when he was 17.

David began his priestly studies immediately after his Leaving Cert in 2010, aged 18. Since then he has obtained a BA (in philosophy and history) from NUI Maynooth and will soon receive a BD (Bachelor of Divinity) from the Pontifical University, St Patrick’s College, Maynooth. He was ordained a deacon last year. He has been appointed a curate in Portlaoise and will take up the appointment on 1 August.

The news of Fr Vard’s ordination provides a welcome boost for vocations in the Diocese of Kildare and Leighlin. Bishop Denis Nulty recently spoke of how 27 of the priests in the diocese are over 75, with 12 of them over 80.

He said that past discussions about parish clustering and reorganisation may have been “that bit more removed from the urgency of the present. Even if we were guaranteed an ordination every year for the foreseeable future, we would still be playing catch-up.”

The diocese, with 205,185 Catholics, covers Co. Carlow and parts of Cos Kildare, Laois, Offaly, Kilkenny, Wicklow and Wexford. None of its 117 churches would be closed, Bishop Nulty said, but Masses in its 56 parishes may have to be curtailed. “It is not my intention to close any churches, but there may in some areas of the diocese have to be a reappraisal of Mass times.”