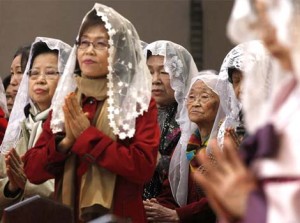 The Pope’s forthcoming visit to South Korea has been criticised for being out of step with the Pope’s emphasis on the poor and on peace.

Street protests about his schedule have particularly targeted a planned visit to the controversial Kkottongnae centre, the country’s largest care home for 4,000 physically and mentally disabled people.

Columban missionary, Fr Noel O’Neill, who has been a speaker at the protests and who lives in a small group home in Gwangju with four people with intellectual disabilities, says “this kind of massive institutionalisation of disabled people has long been discredited in much of the world”.

He feels that, “without overstating it, no symbolic gestures of embracing or kisses by Pope Francis will dispel the underlying truth, that such a model of services is unacceptable and contrary to the very enlightened UN Convention on the Rights of Persons with Disabilities”.

In 1981, Fr O’Neill was the first to introduce community-based services for people with intellectual disabilities in Korea.

Other critics of the papal schedule include fellow Columban missionary Fr Pat Cunningham who feels “the more progressive wing of the Church here feels the poor and marginalised are in danger of being sidelined”.

He warned that the Pope’s visit “could be exploited for political gain by a government desperate to rescue some semblance of legitimacy as it has been dogged by controversy and scandal from the very beginning”.

Fr Cunningham has urged Pope Francis to join the daily Mass at the Jeju Island naval base building site, where the Korean church is supporting local people’s stand against the militarisation of South Korea’s ‘Peace’ Island.

Priests and religious, including Fr Cunningham, were prominent in last week’s annual ‘March For Life and Peace’ across Jeju, expressing concern that building the base just 300 miles from China will raise tensions in the region, as well as destroying a unique and biodiverse world heritage site.

Pope Francis’ apostolic visit to South Korea from 14 to 18 August will be the first papal visit to Asia in just over a decade.

It has two principal focuses: to attend the sixth Asian Youth Day and to beatify 124 Korean martyrs who were among 10,000 mostly lay Catholics killed in successive waves of persecution in nineteenth-century Confucian-dominated Korea.

In June, the Secretary of the Vatican’s Pontifical Council for Justice and Peace, visited the country to respond to claims of “disappointment” regarding the programme.

“The Pope cannot visit everyone who extends an invitation” Bishop Mario Toso retorted at a press conference from the Catholic Bishops’ Conference of Korea (CBCK) headquarters in Seoul. “Pope Francis’s visit is intended to make South Korea’s churches rise and shine on the world,” Bishop Toso said.

“Korea’s priests and religious are working with the disadvantaged” Bishop Toso noted, but added that, “it may take some time for the magisterium to recognise their actions, so they should not merely complain about the lack of recognition”.