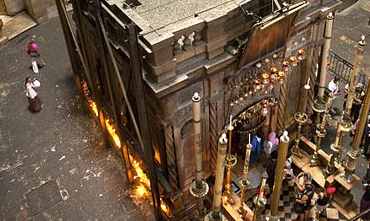 The empty tomb of Jesus Christ has been uncovered for the first time in centuries, thanks to restoration works at the Church of the Holy Sepulchre in the Old City of Jerusalem.

The place where Our Lord rose from the dead has been covered by a marble slab since at least 1555, and possibly centuries earlier, but now archaeologists are examining the tomb, carved into the limestone bedrock, to try to deduce what they can about how the crucified Christ was buried.

The excavation is taking place inside the Church of the Holy Sepulchre, the most holy place in all of Christianity, in a US$4m operation led by the National Technical University in Athens. The project is being chronicled by the National Geographic Society, and work is taking place at night after the church is closed, so as not to disrupt the thousands of pilgrims who visit the site every day.

Six different denominations – Latin (or Roman Catholic), Greek Orthodox, Armenian Apostolic, Syrian Orthodox, Ethiopian Orthodox, and Copts – share custodianship of the building in an uneasy relationship caused by long-standing disputes over rights, responsibilities and territories within the church. Because of acrimony among Christians at the site in the 12th Century, the Turkish sultan who ruled Jerusalem at the time put two Muslim families in charge of opening up and closing the building every morning and night.

Indeed, lack of ecumenical cooperation means that restoration and maintenance work is frequently delayed, and this delay affected the small marble shrine, known as the edicule, that covered the location of the tomb within the enormous church building. For more than 70 years, the edicule has been propped up by ugly iron girders installed by British authorities in 1947. However, matters came to a head when the Israeli police stopped public access to the building after the country’s Antiquities Authority ruled that the growing disrepair had led to it becoming too unstable and too dangerous.

On Wednesday, archaeologists working within the edicule used a pulley to slide open the marble slab covering the tomb. Underneath the slab they found a layer of debris and then a major surprise: a second marble slab, which is grey-coloured, cracked down the middle, features a small etching of a cross, and is believed to date from the 12th century. After lifting this second slab, archaeologists reached the bare stone where the dead body of Jesus Christ was laid.

The archaeological restorers were given only 60 hours to complete their work within the tomb, but the overall project will not be completed until Easter 2017.