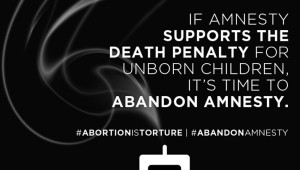 It is time to challenge Amnesty’s blatant double standards on abortion because without the basic right to life, all other rights are meaningless, Cora Sherlock from the Pro Life Campaign has said.

The deputy chairperson of the PLC was speaking as Amnesty International launched its ‘My Body – My Rights‘ campaign earlier this week in which it says that by denying women and girls abortions in cases of “rape, incest, risk to health or severe and fatal foetal impairment” Ireland is violating their human rights.

In an open petition to the Taoiseach, Amnesty calls for the repeal of the Eighth Amendment (which protects the right to life of the unborn and the equal right to life of the mother), the decriminalisation of abortion, and the replacement of the Protection of Life During Pregnancy Act 2013 with wider laws allowing access to abortion, including for risk to the health of the mother.

It says 4,000 women a year are forced to travel outside Ireland to terminate their pregnancy and that this has a considerable mental, financial and physical cost.

In a 112-page report – She’s not a Criminal: The Impact of Ireland’s abortion law – Amnesty reports what it describes as many “shocking” accounts of women denied abortions in Ireland.

Responding to the new campaign, the Life Institute said Amnesty’s decision to become ‘abortion campaigners’ had “damaged the founding mission of the organisation”. 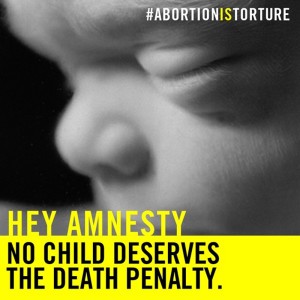 “Amnesty was founded to highlight human rights abuses, especially in regard to political prisoners and those suffering under unjust regimes.”

“But now it seems to spend most of its time attacking the rights of the most vulnerable person of all – the unborn child,” said spokeswoman Niamh Uí Bhriain.

Ms Uí Bhriain said that Amnesty’s position had no basis in fact or international law.

“There is no treaty or convention acknowledging a right to abortion, yet the right to life of every person is widely recognised in international law,” she said.

“Amnesty writes glib reports calling for abortion to be made legal but they ignore the reality of what abortion does to an unborn child,” she said.

“Abortion brutally takes the life of a child: so we have the shocking reality of Amnesty becoming an organisation that supports violence against children who are at their most vulnerable stage of existence”.

Cora Sherlock from PLC said that with its new campaign, Amnesty was moving “further and further away from its roots as a highly respected and impartial champion of the most vulnerable and defenceless members of society”.

To elucidate the point, she said Amnesty had nothing to say about “horrific human rights abuses like babies being born alive after failed abortions and being left alone to die in the corners of hospitals without receiving medical attention or care,” referring to a CEMACH report from 2007 (Confidential Enquiry into Maternal and Child Health. Perinatal Mortality 2005: England, Wales and Northern Ireland. CEMACH: London 2007).

Referring to Amnesty’s call for abortion in the case of rape, Ms Sherlock said that if the organisation was concerned about protecting women “they would seek stronger sentences for rapists and real justice for those who are victims of rape.”

“Rape is an unimaginable and horrendous crime however we do not suggest ending the life of an innocent to rectify any other crime,” she said.

According to figures published by the Department of Health in the UK, 3,735 women who gave Irish addresses had abortions in Britain last year, (up 56 on the year before).

The vast majority of abortions in the UK take place on the grounds of risk to the “physical or mental health of the pregnant woman” (97% in 2012).

This is one of the grounds upon which Amnesty would like to see abortion available in Ireland.