Canada: ‘Assisted suicide law is leading to decline in respect for life’ 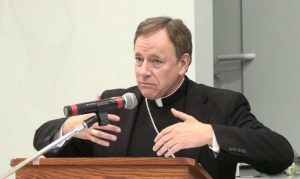 Vancouver Archbishop J Michael Miller has expressed concern at the “rapid decline in respect for life” already taking place across Canada in the wake of the new federal assisted suicide law.

Archbishop Miller said: “With assisted suicide now the law of the land and claiming its first victims, I am greatly alarmed by the impact it is having on attitudes toward those who are suffering as their lives wane.

“Last week in British Columbia we saw the first constitutional challenge of the new law, demanding assisted suicide for non-terminal illnesses. A few days ago, a Montreal hospital said that it may allow assisted suicide in its palliative care unit. Across Canada, some provincial governments and medical regulators are trying to compel participation in euthanasia and assisted suicide by doctors and other health-care workers.

“Can anyone doubt that before long what few protections exist will be history, just as Canada’s previous law against assisted suicide is history?

We need to redouble efforts to help members of our communities who feel that suicide is the answer to their suffering. We must call on our governments and on the medical community to provide better and more accessible palliative care, and on all Canadians to alleviate the loneliness of those who feel isolated and abandoned.”

Archbishop Miller asked why, in a  wealthy country like Canada most people still died without quality palliative or home care? “Why is it that when suicide rates in many communities are at crisis level, we have no robust suicide prevention strategy? How can it be that in a society that is finally beginning to recognize the equal dignity of vulnerable and disabled persons, we are introducing laws that seem to target them for assisted suicide?”

Saying he supported Canada’s “multi-faith and multi-cultural leaders who recently called for strong, well-resourced, national strategies for palliative care and suicide prevention in Canada”, the archbishop reiterated: “Suicide is never the answer to suffering.”

The archbishop of Vancouver said he also stood with the “many medical professionals who have strongly affirmed their opposition to taking part in killing their patients.”

Unless their right to treat patients without coercion to participate in suicide is affirmed, I can foresee widespread resistance by individuals, institutions and conscientious objectors, he added.

The archbishop said the Church was willing to work with provincial governments and medical authorities to help resolve conflicts that would arise. “We will work with regulators to ensure that whatever legislation and regulations are introduced will respect the rights of those individuals and institutions that do not wish to be complicit in homicide.”