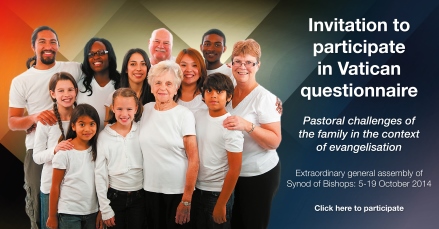 The responses of Irish Catholics to the Vatican’s questionnaire on the family have identified some of the “immense challenges” faced by families today according to the Irish Bishops.

On Thursday, the Irish Bishops Conference gave its first formal statement on the feedback received by the country’s 26 dioceses.

Respondents identified severe financial hardship, unemployment and emigration, as well as domestic violence, neglect and other forms of abuse, infidelity and constant pressures on ‘family time’ as problems causing difficulties for Irish families.

According to the Bishops, some respondents expressed particular concern about the limited amount of State support for marriage and the family.

Thousands of responses to the questionnaire, ‘Pastoral Challenges to the Family in the Context of Evangelisation’ were received according to the IBC.

The Bishops said these responses are already helping to inform the preparations for next October’s Extraordinary Meeting of the Synod of Bishops in Rome.

They also provide the Irish Bishops with a framework “for considering important pastoral issues regarding marriage and the family.”

The overall findings of the survey echo those revealed by Archbishop Diarmuid Martin two weeks ago for the diocese of Dublin and those collated by the Association of Catholic Priests’ adapted survey, which was answered by 1,562 people.

In their statement on Thursday, the Bishops said the wished to “encourage and accompany with love those who are struggling to live family life.”

They acknowledged that many of those who responded to the questionnaire expressed particular difficulties with the Church’s teachings on extra-marital sex and cohabitation by unmarried couples, divorce and remarriage, family planning, assisted human reproduction, homosexuality.

“The Church’s teaching in these sensitive areas is often not experienced as realistic, compassionate, or life-enhancing,” they revealed.

Some respondents saw it as disconnected from real-life experience, leaving them feeling guilty and excluded.

“We recognise our responsibility as bishops to present faithfully the Church’s teaching on marriage and the family in a positive and engaging way, whilst showing compassion and mercy towards those who are finding difficulty in accepting or living it,” the Bishops Conference said.

They stated that support for marriage and family life is central to what the Church teaches and lives.

“Marriage is a sacrament, a sign of God’s love, which mirrors the love of Christ for His Church. The gift from God of the family, based on the love of wife and husband and open to life, is a gift that the Church seeks to protect and cherish.”

As the original cell of society, the family is essential for the formation of members of society, the statement said. “It is a place where generosity, tenderness, forgiveness, stability, care, acceptance, and truth can be best taught and learned.”

Parents, the Bishops said, are “the first and best teachers of their children in faith”. The parish community has an important role in assisting parents in bringing their children to Jesus Christ and leading them in the ways of faith.

The Bishops encouraged the faithful to engage in continued dialogue and discussions on the critical issues of marriage and the family, particularly over the coming two years.

They flagged the forthcoming conference which will be facilitated by the Bishops’ Council for Marriage and the Family on 14 June next.

The Extraordinary Synod in the Vatican in October will be followed by an Ordinary Assembly of the Synod in 2015, also be themed on the ‘Family’.

In addition, the World Meeting of Families will take place in Philadelphia in September 2015.

The Irish bishops asked people, priests and Religious to pray for families and for the success of these gatherings in line with Pope Francis’ recent request in his Letter to Families on 25 February.