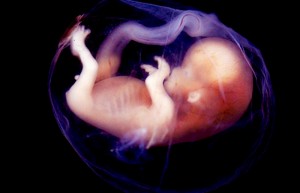 Both medical professionals and legislators have a duty to acknowledge that an unborn child with a life-limiting condition, including anencephaly, continues in every clinical and moral sense to be alive and worthy of continuing life-supporting intervention and care until natural death, the Northern bishops said in a statement on Tuesday.

Ahead of today’s vote on an amendment to Northern Ireland’s Justice Bill which would permit the direct and intentional killing of unborn children with life limiting conditions, up to the moment of birth, the bishops appealed to members of the Northern Ireland Assembly.

The proposed amendment extends the law on abortion, they warned, and said it cannot be reconciled in any way with a commitment to the universal moral principle of the right to life upon which the very existence and well-being of society is founded.

The amendment, the bishops said, involves members of the Assembly weighing the value of one life against another and radically altering the principles upon which society’s approach to the inherent dignity of persons with disability and terminal illness is based.

“If the proposed amendment is passed, some children with a terminal diagnosis would lose their right to life and medical care while others with the same diagnosis would continue to receive treatment and care based on the choice of their mother.”

The Northern bishops said this radically changes the inherent nature of the right to life, making it contingent on the will of another person.

“This is the fundamental and radical moral shift that is involved in supporting the proposed amendment.”

They also noted that experience shows that once the fundamental principle of the inherent right to life has been conceded, pressure to widen the circumstances in which life can be lawfully taken inevitably follows.

While pregnancy is a hopeful time, the bishops stated, that hope can be painfully dashed for parents when the child in the womb is diagnosed with a life-limiting condition.

“Parents in this situation have a right to accurate information about what such a diagnosis actually means. Such life-limiting conditions in pregnancy, including anencephaly, are sometimes inaccurately described as “fatal” or “lethal” abnormalities, implying that death has effectively occurred already or that a time of death can be predicted with certainty. This is totally misleading.”

“The reality is that every case is different.”

“Some seriously ill babies will die before birth and others will live for a few hours, others for weeks or months while some will live for significantly longer. This is an acknowledged medical fact. No doctor can tell for certain how long any baby in these circumstances will live.”

In their statement the Catholic leaders said that with all who believe in the inherent right to life of every person, irrespective of how long or short their life will be, “we appeal to Members of the Assembly to defend the dignity, humanity and right to life of unborn children with life-limiting conditions and to ensure mothers facing such traumatic situations in pregnancy receive the best possible support and care that a life-affirming society can provide.”

“We ask Members of the Assembly, in the interests of a truly compassionate and caring society, in which the most vulnerable are protected equally and with the same dignity as others, to reject the proposed abortion amendment and to work instead for the right of parents to peri-natal hospice services to support them in caring for their terminally ill child until natural death.”

Stating that it is a sign of the progress of NI society that it has become more effective at caring with dignity for those with terminal illness as they journey towards natural death, they continued, “It would be a sign of our human progress in compassion and care if government policy focused on providing similar hospice care to those with terminal illness in the womb. Abortion, the destruction of a human life, can never be considered a humane or dignified response to the needs of a terminally ill child in the womb.”

They also highlighted that many parents of children born with life-limiting conditions, including anencephaly, speak of how important it was for them to have the possibility of holding and caring for their child for a few hours or even for a few minutes, until death naturally occurred.

They suggested that everyone listen to their stories on the website www.onedaymore.ie or www.everylifecounts.ie

“With all who believe the future of humanity lies in a society based on respect for the inherent dignity of every person from conception to natural death, and on the development of a culture of life, care and compassion in the world, we encourage Catholics and others, even at this stage, to contact their politicians to express concern about the proposed amendment and to ask them uphold the equal right to life of a mother and her unborn child in all circumstances, as the greatest guarantee that both will receive the best available life-supporting care.”