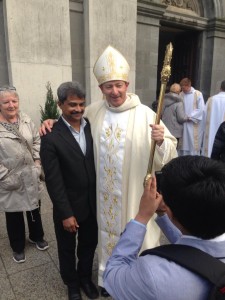 On Sunday, the Diocese of Waterford and Lismore saw the torch of leadership “passed from one fine man to another” as Bishop William Lee presided at the ordination of his successor Bishop Alphonsus Cullinan.

In his words of welcome as chief ordaining prelate, Bishop Lee told the incoming bishop that the ceremony was “a historic day” for all in the diocese.

“We are privileged, Fr Phoncie, to have you as our bishop and you are certainly privileged to be entrusted with the care of the diocese of Waterford & Lismore,” he said.

Noting that the ordination was taking place on Divine Mercy Sunday, Bishop Lee said mercy and love have been central to Pope Francis’ message since his election.

The Apostolic Mandate from Pope Francis was read by Mgr Nicholas O’Mahony, the Administrator of the diocese.

The Mass was concelebrated by 29 bishops including Archbishop Eamon Martin, Archbishop Diarmuid Martin, and Archbishop Michael Neary, as well as priests of the diocese of Waterford & Lismore and Limerick.

Other Christian denominations in the Waterford area included representatives from the Church of Ireland, the Presbyterian Church, the Methodist Church, the Russian Orthodox and the Coptic Churches.

In his homily, Mgr Michael Olden explained that Bishop Cullinan is the 26th Bishop of Waterford and Lismore since the Reformation and the second Limerick priest to ‘take possession’ of the See.

Through his new role in Waterford & Lismore, Bishop Alphonsus would enter into a Christian legacy that stretches back even to pre-Christian times and to long before dioceses or parishes came into existence in the 12th century.

“In this area of the south east it is reckoned that at least 60 people were revered as Saints in the Irish way even before dioceses were established. Most of them were founders of early Celtic monasteries, some male, some female,” Mgr Olden recalled.

Speaking to his new bishop, Mgr Olden said “On this blessed day in this historic place let us tell our new bishop that what we will be seeking from him in charity will be gentle prayerful leadership rather than hectic management.”

“We will welcome his repetitious – yes repetitious – and gentle reminders as to how we should seriously follow Jesus Christ, and how we should, with conviction and with deep respect, encourage other people, perhaps people in our own families, to find faith in a personal God who is loving and forgiving and understanding towards all who turn to him.”

He assured Bishop Cullinan that he would have the goodwill and cooperation of priests and people.

“On this day, Divine Mercy Sunday, a relationship is born between Bishop Alphonsus and the people of this diocese, a diocese with a varied and sometimes colourful history. May every home and heart in Waterford & Lismore, be encouraged by that relationship,” he prayed.

In his words of gratitude, the new Bishop of Waterford & Lismore said it was a great joy to have the diocese’s deacon at the ceremony. “You are a sign of hope and of the generosity of our young people.”

He added that he was “convinced that there are many more, who with the right encouragement, can be helped to make life commitments in the Church whether that be to marriage, religious life, the permanent diaconate (and we look forward to the ordination of Lazarus later in the summer), or the priesthood. Let us all continue to pray and work in promoting these vocations.”

Underlining that we all need God, the newest member of the Irish hierarchy asked, “How many among us seek fulfilment and meaning in all sorts of places, in the wrong places, in a kind of desperate search for inner peace? And cut ourselves off from the vine and wither on the ground.”

He added that out of love of Jesus “we put ourselves at the service of others especially those most in need in our society: the poor, the sick, the vulnerable, those who feel alienated from God, and those on the margins”.

“We reach out to those who have turned away from the practice of the faith, many of whom are in our own families and parish communities. How can we walk with them in a way that will help them to see once more the beauty of following Jesus?”

He said the Church was called to step out from its doors to bring Christ to all. “This is our mission: to be filled with Christ and to bring Him to others. Christ has no body now but yours and mine.”

He ended on a personal note, stating, “Little did my father think as he walked the streets of Waterford over seventy years ago while studying in De la Salle Teacher Training College that one day a son of his would be bishop of this historic and beautiful diocese! God indeed has a plan. He knows what He is about. Have we the courage to trust in Him?”

Alphonsus Cullinan was born in Lahinch, County Clare in 1959 to Christy and Rita and has four sisters and five brothers.

A priest of the Diocese of Limerick, his family moved to Limerick city where he attended the Salesians for early education, John F Kennedy National School and the Crescent College Comprehensive (SJ) for his secondary education.

From 1978 to 1981 he attended Mary Immaculate College of Education Limerick qualifying as a primary teacher (BEd) in 1981, and taught for six years in Castleconnell, Co Limerick.

Alphonsus worked part-time during that time for four years with the Bunratty Castle Entertainers before going to Spain where he taught English for two years in a school in Valladolid.

Thereafter, between 1989 and 1995, he studied at the national seminary in St Patrick’s College, Maynooth, where he completed an STL (Licentiate in Theology).

Fr Alphonsus Cullinan was ordained a priest by the late Bishop Jeremiah Newman in 1994 in St John’s Cathedral, Limerick, and was appointed curate in St Munchin’s Parish Limerick city where he ministered from 1995 to 1996.

His next appointment was as chaplain to the Regional Hospital in Limerick, ministering in the hospital from 1996 until 2001.

He studied for his doctorate in moral theology in the Alfonsianum in Rome from 2001 until 2004.

On his return to Ireland, Fr Cullinan was appointed chaplain to the Limerick Institute of Technology for seven years from 2004 until 2011.

Fr Cullinan’s most recent appointment was in 2011 as Parish Priest of Rathkeale in Co Limerick.