Bishop threatens “boys” who want to kidnap him with excommunication 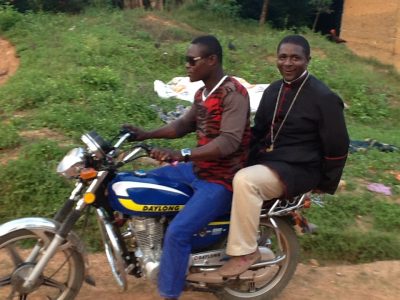 Parishes will be without pastors if youngsters don’t stop kidnapping priests and threatening to kidnap the bishop in a diocese in Cameroon.

According to Bishop Andrew Nkea, the “boys” behind these kidnaps told their victims that unless he, the bishop, paid his “fine” they would kidnap him, too. Bishop’s response was a threat of excommunication.

In a pastoral letter, seen by Catholic charity Aid to the Church in Need, Bishop Nkea said the youths were “venting their anger” against him after he attended an event (which they disapproved of) — the Grand National Dialogue in Yaounde, called in response to the conflict between the Anglophone and Francophone regions of the country. The bishop stated: “[The youths] told the priests that their target was the bishop and, until [I] paid [my] fine [of 500,000 CFA francs (€764.13)], they would track down and kidnap [me]. The truth is I don’t have this kind of money to pay anybody.”

A series of abductions and gunpoint have taken place since October 2019 against pastors in a region of Cameroon. For example, Father Felix Sunday, parish priest of Afap, was abducted by gunmen claiming to be Ambazonian separatists on 20 October. Later that day Father was released, but two other priests narrowly escaped other attempted abductions. Less than a fortnight later on 1 November four gunmen held the parish priest and the assistant priest at gunpoint at the presbytery of Kembong Parish and demanded one million CFA francs, equivalent to about €1,500.

In his pastoral letter, Bishop Nkea said: “The boys claimed that they took up guns to protect the population and it is a great contradiction that these guns are now being used to terrorize the very population they claimed to be protecting. We all joined to decry the brutality of the military against the people but now it is our own children who have turned against their own people and they think it is normal?”

At the heart of these acts of violence is the conflict between Francophone and Anglophone Cameroon which has simmered for decades. The conflict was reignited in 2016 when teachers and lawyers protested the use of French in schools and courts. The fallout resulted in the loss of 3,000 lives and the displacement of 500,000 people.

Following the violence and abductions, Bishop Nkea withdrew priests from the parishes of Kembong, Ossing and Eyumojock until further notice, saying: “These boys who harass the priests are from these villages, and until the population dialogues with their children and gives me a written guarantee of the safety of the pastors who work for them, the parishes will remain without pastors.”