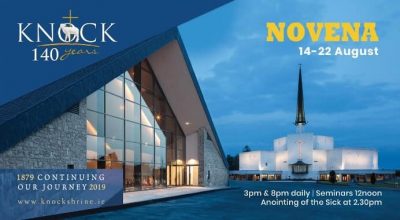 Bishop Kevin Doran of Elphin has said the most striking thing about the 15 witnesses to the Knock apparition in 1879 is their diversity.

In his homily on Sunday at Knock Shrine for the Elphin diocesan pilgrimage, Bishop Doran reminded the packed basilica that the witnesses were “men, women and children ranging in age from four-year-old John Curry (who spoke no Irish) to Bridget Trench in her seventies (who spoke no English).”

He added, “Their attention to detail was quite remarkable.”

He said most of those who witnessed the apparition “were ordinary people who lived in a very ordinary little village” and he stressed that the apparition was unusual in that there was no spoken message.

“It was a short moment of contemplation, which touched people’s hearts and drew them to prayer.”

Of the apparition on the night of 21st August 1879, he observed, “I think it is worth saying that people do not necessarily have religious experiences of this kind because they deserve them. If we are blessed with apparitions or moments of contemplation, these are gifts that God gives us, because he knows we need them. Usually God’s gift is not intended just for the individual. It is to be shared so that others may also come to believe.”

Addressing the issue of what happened to the witnesses afterwards, Dr Doran recalled that John Curry, the grand-nephew of the youngest witness, wrote about the visionaries of Knock and said that “they went their separate ways, leading unspectacular lives”.

“They were not looking for fame or publicity and there is no evidence that their own families made any great fuss about them.”

His grand-uncle John Curry, the youngest visionary, as an elderly man lived in a nursing home run by the Little Sisters of the Poor in New York. He served Mass there daily; yet it was only by accident that the Sister in charge, who was also Irish, learned that he was one of the visionaries of Knock.

Asking if their silent encounter with Mary, St Joseph, St John the Evangelist and the Lamb of God made any difference to the lives of the 15, Bishop Doran commented, “I think the answer is that holiness is not always very public.”

“These were people who knew about Jesus, Mary and Joseph. They knew about John the Evangelist, enough even for Mary Byrne to compare him with a statue that she had seen in Lecanvey. They knew the meaning of poverty and disadvantage. They seem to have gone on with their daily lives, carrying out their responsibilities in their families and in their community and making their daily sacrifices, until the Day of the Lord came. For them, the apparition at Knock was not just about an event that happened to them in the past, it is about the hope that lies in the future, a hope that gave meaning to their daily lives.”

The Bishop of Elphin asked the faithful how their visit to Knock helps them to walk with Mary’s Son in their daily life.

“The apparition is all about Jesus, the Lamb who laid down his life and who now lives forever and who holds out to all who believe in him the promise of eternal life. It is about Mary, who according to our faith, was Assumed into Heaven and lives now in the presence of her Son. It is about Joseph the original silent witness and about John, who wrote down all that he saw and heard so that we might believe.

He added, “It is about how that hope strengthens you to return home and, like the fifteen witnesses of the apparition, to offer once again with generosity the daily sacrifices of your own life, however big or small they may be, ‘as we wait in joyful hope for the coming of our Saviour Jesus Christ’.”