Home > Featured > Bishop Dempsey has “the mark of Francis on him” 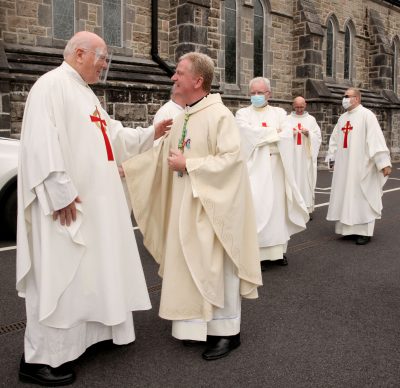 Fr Frank McNamara, who baptised Bishop Paul Dempsey in Carlow Cathedral in 1971, chatting with the new Bishop of Achonry outside the Cathedral of the Annunciation and St Nathy in Roscommon on 30th August 2020. Pic: John McElroy

The co-founder of the Association of Catholic Priests in Ireland, Fr Brendan Hoban, has given a ringing endorsement to the country’s newest and youngest bishop.

On 30th August, Bishop Paul Dempsey, the former parish priest of Newbridge in the diocese of Kildare and Leighlin was ordained as Bishop of Achonry.

Writing about the Pope’s appointment in his weekly column in the Western People, Fr Hoban reveals that the word among the clergy is that “Achonry has done well” and that the 49-year-old bishop has “the mark of Francis on him”.

He adds that the new bishop is the kind of personable, informal bishop who will be close to the people and lead them through a process of mutual listening, consultation and discernment, that Francis believes is the way of being church in the future.

According to Fr Hoban, what Pope Francis is saying to the 5,000 bishops around the world is that unless they are pastors (that is, close to the people), they shouldn’t be bishops.

“Yes, the Church needed canon lawyers and theologians,” but they can teach in a seminary or work in a diocesan office.

Elsewhere in his column, Fr Hoban writes about Sr Maureen Kelly, a native of Ballycastle, who is a Mercy Sister in Lima, Peru.

She spent most of her early life teaching maths and science in Our Lady’s Secondary School, Belmullet and for the last twenty years she has worked as a missionary in Peru.

She told Fr Hoban about her excitement at the difference Pope Francis is making to the Church, in particular the impact of some of his episcopal appointments are having – specifically his choice of the new archbishop of Lima.

She explained how Pope Francis’ choice had signalled an important transition in Lima from the retiring archbishop, Cardinal Juan Luis Capriani, an aristocrat, who was a very conservative and reactionary churchman.

“He was very ill at ease with the shift in the Latin American Church in 2007 when a general conference (in Aparecida) marked a significant step away from a clerical, introspective church to a church of the people where decisions (rather than being handed down) were arrived at through a process of mutual listening, consultation and discernment – very much as envisaged in the Second Vatican Council. Of the 133 delegates at Aparecida, Capriani was one of only two said to have voted against the concluding document and, apparently, he left the conference in a huff.”

“Present at the conference in 2007, and one of the main supporters of the Vatican Two concept of ‘the Church as the People of God’, was Cardinal Jorge Bergoglio, now Pope Francis. So when Capriani reached his 75th birthday and retirement loomed, the people of Lima held a collective breath to see if Francis’s appointment of a successor to Capriani would reflect a move from a clericalist to a people’s church.”

Just twenty-five days after Cipriani’s 75th birthday, and true to his vision of the future of our Church, Pope Francis appointed Carlos Castillo Mattasoglio, a parish priest from one of Lima’s shanty-towns.

“It was a clear signal from Francis that the church in Peru was moving towards the option for the poor at the heart of the Aparecida declaration – a move opposed by Capriani and supported by Castillo,” Fr Hoban underlines.

He refers to Austen Ivereigh’s recent book, Wounded Shepherd, Pope Francis and his Struggle to Convert the Catholic Church, in which the author described the appointment as “the ecclesiastical equivalent of a hand-brake turn”.

Francis had pointed the Peruvian Church in a very different direction by appointing Castillo, the mirror opposite of Cipriani.

Sr Maureen Kelly related to Fr Hoban the events of around Castillo’s ordination as archbishop in which the people of his parish gathered at their church of San Lorenzo in the shanty-town on the bank of the Rimac river and, together with Castillo, walked across the bridge to the other bank to Lima’s Cathedral, symbolically connecting the centre of the diocese with the shanty-towns on the opposite bank.

“It was an emotionally-charged occasion, a dispossessed people claiming their birthright as baptised Catholics, a proclamation of their desire to have their voices heard at the centre of their church and their celebration of a new archbishop who would represent their concerns and facilitate their participation in their church.”