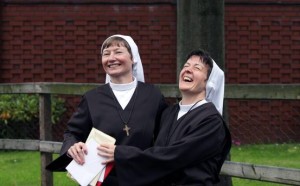 The former BBC journalist who gave up her high profile career to train to be a nun has taken the next step on her journey into religious life.

Martina Purdy received the white veil of a novice on Thursday along with Elaine Kelly, a former family barrister, at the Adoration Convent on Belfast’s Falls Road.

The two will now be called ‘Sister’ as they have completed their postulancy and the novitiate marks a more serious contemplation of religious life.

The Adoration Sisters also welcomed Anne Cahalan as a postulant on the same day.

Martina Purdy had been a journalist in Northern Ireland for over 25 years, working at the Belfast Telegraph and the BBC, while Elaine Kelly was a barrister for 23 years before also joining the Adoration Sisters last year.

The Adoration Sisters’ main source of income comes from the baking of altar breads, and all their work is carried out in silence.

The congregation was  founded in Paris in 1848 by Théodelindé Dubouche, known now as Mother Marie Thérèse.

In May, Sr Martina compared her decision to become a nun as undertaking “a makeover in reverse”.

The former correspondent left her BBC job in October 2014 to enter the religious life and she said many of her colleagues were in shock at the news.

In her address as part of the Little Way Novena in Derry in May this year she said she had chosen a “simple, hidden life of little things”.

She explained that her life now revolved around baking altar breads, cooking, cleaning and praying.

Through raised as a Catholic and educated at a convent school she said she had no ‘calling’ to religious life when she was younger.

Instead, she was drawn towards news, and had a passion for politics.

“Did I want to be a nun? Absolutely not. I have to say poverty, chastity and obedience aren’t exactly big sellers,” she said.

“Who wants to be a living sacrifice? I wanted to be a journalist, and I was happy enough to get married and have children, if that happened.”

However, her journey into a deeper faith began about eight years ago following a holiday to Peru when she thought about becoming an aid worker.

“I started to get a growing sense that I lived a pretty selfish existence. I thought my life was a little bit too easy,” she said.