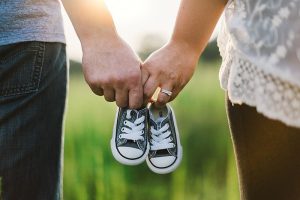 Baby shoes are being used at midday Mass today in Youghal, Co Cork, to remember and honour victims of Church-related abuse.

The act of remembrance for those who suffered institutional abuse in Church-run institutions and those who have suffered clerical sexual abuse as children, follows a protest held last Sunday outside the church.

The protest, organised by the group Standing 4 Women, was timed to coincide with the Papal Mass being celebrated in the Phoenix Park. More than a dozen pairs of children’s shoes were placed on the railings in front of St Mary’s Parish Church on Ashe Street as part of the protest.

“I was up in Dublin at the Phoenix Park at the time,” said PP Canon David Herlihy. “But after the protest, the sacristan came out and took the shoes down and then there was uproar on social media. We had given the shoes back to the protestors, but people were very angry that the shoes had been removed from the railings. I then received a call from a spokesperson for the group saying they were going to go back up on the railings on Thursday at 12 noon.”

Canon Herlihy said he was at a loss about what he should do.

“I decided that the shoes would be allowed stay on the railings from Thursday to Saturday evening,” he told CatholicIreland.net. “Then, while I was explaining this to parishioners at Tuesday morning Mass it came to me that just before 12 o’clock Mass on Sunday, the shoes could be taken up to the sanctuary as an offering and placed before our Icon of the Holy Family.”

A spokesperson for the protestors, Kirsty Murphy, said she was pleased by Canon Herlihy’s initiative, which she believes is unprecedented.

“There is a lot of hurt surrounding these issues and there will be for decades, but the hurt will never go away if we don’t acknowledge it and try to find a way of healing,” said Canon Herlihy. “Everyone would like to undo the past, but that is impossible. One thing that we can do is to do small things for one another that show our support and our sympathy. It shouldn’t ever be a case of them and us. There is a lot of hurt.

“I hope and pray that what we are doing at Sunday’s Mass will do some good. So far, it has the support of parishioners.”