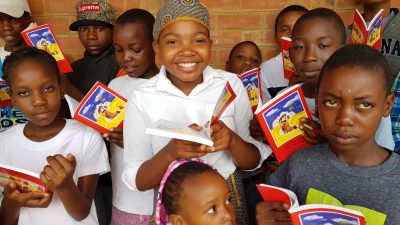 ACN’s Child’s Bible being read by children in Zimbabwe: © Aid to the Church in Need

A lockdown project, inviting high-profile personalities to record the Bible, has reached its climax and is now available in full. Catholic charity Aid to the Church in Need (ACN) enlisted the support of bishops, a BBC presenter and an actor, among others, to each read a chapter of God Speaks to His Children, an abbreviated Bible for younger readers.

The project, which was completed on Thursday 27 August, was originally conceived as a way to help parents during lockdown. Dr Caroline Hull, ACN (UK)’s community outreach manager, said it will be an invaluable resource for children as they prepare to go back to school: “We hope primary schools, families and especially young children will make use of the Child’s Bible Project in the classroom and at home.”

Every weekday since Easter Monday (13 April), ACN uploaded to YouTube a video of a chapter being read out, and also provided a weekly workbook containing video links, activities and other resources, which can be accessed on the charity’s website. Alex Macqueen, who has starred in Horrible Histories: The Movie – Rotten Romans, The Thick of It, The Inbetweeners and Peep Show, read chapter 11, while Jen Copestake, a BBC presenter, read chapter 9.

About 25 Catholic bishops from Argyll and the Isles in Scotland to Plymouth in south-west England also read and reflected on a chapter. Headteachers and lay leaders, as well as ACN staff and volunteers, also joined in. Dr Hull added: “I hope that everyone involved feels proud of what we have achieved both for our children here at home and also, through our prayers and support, for the millions of Christian children who receive copies of the ACN Child’s Bible elsewhere in the world.”

The project came in response to a Bible initiative ‘The God who speaks’ by the Catholic Bishops’ Conference of England and Wales, and celebrates ACN’s Child’s Bible which has been translated into 190 languages with more than 51 million copies printed.

Lorraine McMahon, head of ACN operations in Scotland, said: “The Child’s Bible Project, like all of ACN’s school resources, is a fantastic opportunity for ACN to engage with the youth about the work we do, through our Christian faith. Thank you to all of those who took time out to support our project.”