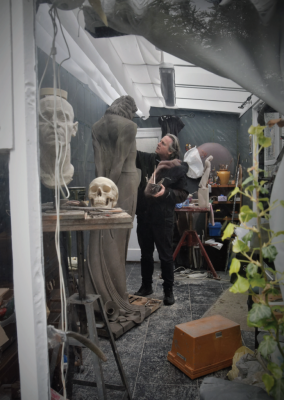 A new statue of St Oliver Plunkett will be unveiled in Armagh Cathedral tomorrow evening as part of a tridiuum of prayer in honour of the martyred archbishop.

The triduum, which is taking place across the archdiocese, started on Sunday, with a Mass at St Peter’s Church, Drogheda, where relics of the 17th century martyr are venerated.

Immediately following that Mass, more than 100 people set off from St Peter’s on a 100km camino pilgrimage from Drogheda to Armagh. Relics of the saint are due to arrive for veneration at St Oliver’s Church, Dorsey, Co Armagh, this evening at 8pm.

These initiatives spring from the Red Wednesday commemoration organised last year by the charity Aid to the Church in Need. On 28th November, prominent cathedrals and churches across Ireland were illuminated with red lighting to highlight the fact that in many parts of the world today Christians are persecuted for their peacefully held beliefs.

On that day, Archbishop Eamon Martin announced that he intended to honour “martyrs of the past, present and future” by erecting a statue of Oliver Plunkett in St Patrick’s Cathedral.

The seven-foot high bronze statue of St Oliver Plunkett is by Dublin sculptor Dony MacManus. It depicts the saint in the final moments of his earthly life. The statue very much emphasises St Oliver’s humanity; he is shown in an Ecce Homo pose, his hands bound behind his back gently clasping the martyr’s palm, which trails down to the archbishop’s pallium, making it clear that his martyrdom is connected with his episcopacy. To the front of the statue the hangman’s rope sits next to the martyred archbishop’s pectoral cross.

Oliver Plunkett was executed by being hanged, drawn and quartered at Tyburn on 1st July 1681. He was the last Catholic to be martyred in England by the British crown and the last resident Irish bishop to be put to death for witnessing the faith.

He was beatified in 1920 and canonised by Saint Pope Paul VI in 1975. He was the first new officially recognised Irish saint in almost seven hundred years.