Home > Featured > Ale to the Chief! Texan PP is the toast of US brewers

Ale to the Chief! Texan PP is the toast of US brewers

Holy Home brew! A Texan priest is being hailed as one of the best brewers in the United States after he and one of his parishioners won the Ninkasi Award, American home brewing’s equivalent of a Nobel Prize. 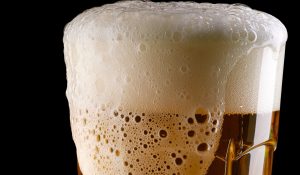 Described by his local newspaper, the Fort Worth Star-Telegram, as a “thoughtful, soft-spoken yet authoritative priest”, parish priest Fr Jeff Poirot takes a weekly break from his ministry at Holy Family Church every Tuesday evening by engaging in the production of ale with his friend Nick McCoy. Indeed, the paper quoted McCoy as saying: “Jeff is just a dude when we are brewing.”

The two Catholic beermeisters take their inspiration from the Trappist brewing tradition – a tradition that is particularly strong in Belgium, where today there are six monasteries producing ales that are noted for their fruity sweetness and high alcohol content.

Indeed, in ancient Ireland every monastery had its own brewery – not only was the weak beer they produced safer to drink than the local water supply, but beer was a valuable source of B vitamins and micro nutrients. In Ireland, St Brigid was famed as being an excellent brewer and St Patrick had a brewer named Mescan in his entourage.

Back in Texas, Fr Poirot appears to be an American with a strong love of European pop culture as well as hop culture. Although his prizewinning brews are based on recipes developed in the middle ages, he and Nick McCoy entered the competition under the name ‘Draft Punk’, a play on the name of the very modern French techno band Daft Punk.

The award won by Draft Punk at the National Homebrew Competition at Minneapolis is named after an ancient Sumerian goddess of beer. An ancient tablet containing ‘A Hymn to Ninkasi’, written around 1800 BC but dating from an earlier period, is not only one of the world’s oldest written documents – it is also the world’s oldest known written record of the art of brewing and beer making.

Certainly, winning an award named after a pagan goddess did not disconcert this Catholic priest. “It was surreal,” Poirot told the Fort Worth Star-Telegram. “After we were done screaming from excitement when we won, it was hard to put into words what winning the Ninkasi means to us.”

This was the third time that Draft Punk had entered the competition, which they won overall after taking first place in the Strong Belgian and Trappist Ale category and in the Specialist Indian Pale Ale category.

For beer aficionados: the prizewinning Trappist-style ale was a Belgian Quadrupel and was named ‘Jeffestival’ because the pair brewed it for the first time on Fr Poirot’s 43rd birthday. Overall, there were 8,317 beers entered in the home brew competition.