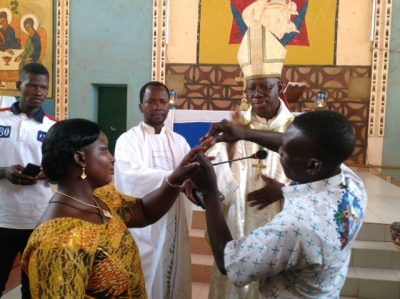 After 14 people – mostly children and teenagers – were killed during a Sunday service in Burkina Faso, Bishop Justin Kientega told Catholic charity Aid to the Church in Need (ACN) that Western powers should focus on security instead of weapon sales: “The Western powers should stop those who are committing these crimes, instead of selling them the weapons that they are using to kill the Christians.”

The bishop accused Islamists of being behind Sunday’s attack at a Protestant church in Fada N’Gourma, close to the border with Niger.

Bishop Kientega said: “No one has claimed responsibility for the attack, just as no one claimed responsibility for the previous ones. So we don’t know whether it is one group or several groups that are involved. What is certain, however, is that they are waging an Islamist campaign and trying to provoke a conflict between the religions in a country where Christians and Muslims have always lived peaceably side by side.”

Last month, bishops from Burkina Faso, Niger, Mali, Ivory Coast and Ghana met in Ouagadougou, the capital of Burkina Faso, and discussed alleged Western indifference to Islamist violence in the region. Bishop Kientega said: “We wondered how it could be possible that so many people know nothing of our situation and how Western governments and Western media are simply not making any mention of it. Evidently, many of the Western powers have an interest in seeing the violence continue, and their profits are more important than our lives.”

Since the beginning of the year, more than 60 Christians have been murdered in Burkina Faso, leading to what the bishop called “the unprecedented level of insecurity”. He added: “There is an ongoing persecution of Christians. For months, we bishops have been denouncing what is happening in Burkina Faso, but nobody is listening to us. Evidently, [the West] are more concerned with protecting their own interests.”

Attacks such as Sunday’s have caused Christians in the country to abandon their homes and there are thousands of internally displaced persons (IDPs) cared for by the Church. In September ACN reported on how Christians were given violent ultimatums to leave their villages or convert to Islam, which caused 2,000 people to flee their homes.

ACN is supporting religious Sisters in Burkina Faso, and Bishop Kientega thanked the charity and its benefactors: “We are being persecuted; but we retain our trust in the Lord and that all this may soon come to an end. Thank you to all of you for your prayers.”